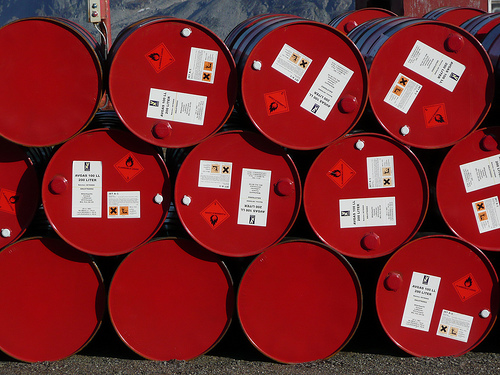 Why does BP get to keep the approximately 10,000 barrels of oil it’s siphoning from the gusher in the Gulf? Considering the ongoing disaster they’ve created, it seems absurd that the company should get to profit from the crude they’re capturing (especially considering there’s a criminal investigation into the company underway).

Andrew Revkin suggests BP give the oil to the government:

Along with all of its other obligations and penalties, perhaps BP should be required—if only for symbolic value — to contribute to the United States Strategic Petroleum Reserve an amount of oil equal to every barrel now being salvaged from the seabed gusher at its Macondo Prospect well.

Heck, why not the entire estimated flow, given that the company’s chief executive, Tony Hayward, has acknowledged its failure to prepare for worst-case risks. That momentous lapse has resulted not only in 11 deaths and spreading environmental and economic disruption, but also the loss of a resource owned by the American people.

Oil is currently selling at about $75 a barrel. That means the company could be making $750,000 per day from what they’re siphoning. It’s a drop in the bucket compared to what it’s shelling out to pay for the disaster, but there’s no reason BP should get to keep it considering how much they owe Gulf Coast residents and the federal government.