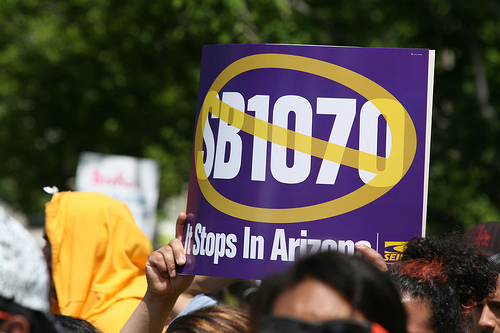 The day when the majority of newborns in the US are nonwhite minorities is almost here. The Wall Street Journal reports today that, between July 2008 and July 2009, the percentage of minority newborns in this country jumped from 46.8 percent to 48.6 percent. That likely means the point at which minority newborns are 50 percent or more of all US-born kids is almost here, if it hasn’t occurred already.

It’s also a reminder of the major demographic shift in this country, in which all whites cease to be the majority, replaced instead by a “majority minority.” Here’s the Journal on this:

“The question is just when,” said Kenneth Johnson, senior demographer at the Carsey Institute at the University of New Hampshire. He guesses the milestone will be crossed in the next few years, and could happen as early as 2011…

A number of forces are pushing the US toward a “majority minority” future. The median age of the white population is older than that of nonwhites, and thus a larger share of minority women are in prime child-bearing years. In addition, white women are having fewer children than nonwhites, while the growth in mixed marriages has led to more multiracial births.

Right now, minorities in toto comprise around 35 percent of the US population, up from 30 percent in 2000, according to Census data, which means the white majority will remain for a few decades more. (In 2008, the Census predicted a nationwide majority-minority by 2050.) Already, though, four states—Hawaii, Texas, California, and New Mexico—have majority-minority populations. This, of course, is the context for the nation’s increasingly fraught immigration debate, with states like Arizona pitted against the Obama administration and more left-leaning immigration reformers. The battle will only grow more feverish, as other states like Michigan try to pass Arizona-like immigration bills of their own.

For future political candidates, this demographic shift is a stark reminder of who they’ll need to court if they want to be elected. With that in mind, you’ve got to wonder if immigration crackdowns like Arizona’s law won’t soon be a political suicide for the politicians backing them.