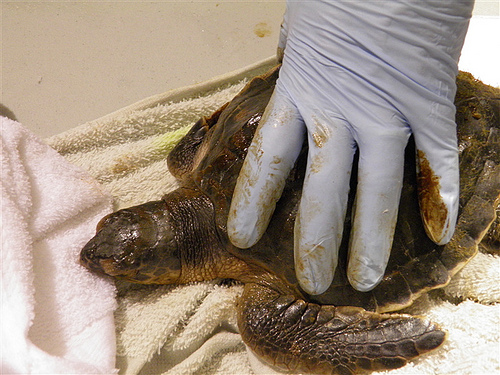 So remember that video last week where a boat captain said endangered sea turtles were being burned alive by BP? People are not taking kindly to it, voicing their opposition on Facebook and elsewhere. Credo Mobile* has jumped on the story, issuing a petition telling BP to “Stop blocking the rescue of endangered sea turtles before you burn them alive in your ‘controlled burns.'” By today the petition had more than 75,000 signatures.

While wildlife conservation organizations are still reporting they haven’t seen any burned turtles, the position and trustworthiness of rescue boat captain seen on the video has been confirmed. And it seems that it’s indeed very possible Kemp’s Ridleys were killed in the controlled burns, where trawlers use booms to corral oil into a pool before setting it on fire. To date, there have been at least 275 controlled burns in the Gulf, consuming 9.32 million gallons of oil. UC Davis’s Dr. Mike Ziccardi, who’s heading turtle rescues in the Gulf, wrote me in an email today that:

“Like you, we are very concerned about the possibility of there being impacts to turtles related to controlled burn operations, as juvenile turtles and spilled oil can aggregate in mats of seaweed… Burn operations target these areas when sufficient oil is present, so these are also places where there is risk of harming turtles.” Ziccardi noted that his operations had not seen any burned turtles, “but our targeted on-water collection efforts do target very similar areas.”

Meghan Calhoun from Audubon concurs. She says the juvenile Kemp’s Ridleys, an endangered species her organization is rescuing, are around two to three years old and can be found hanging out around the clumps of sargassum sea weed where they usually shelter until they’re large enough to survive in the open seas. Unfortunately, the clumps of sargassum are perfect for collecting oil and to a turtle, a glob of oil and a forest of sargassum may look very much alike. “Turtles are actually mistaking the oil now for the sargassum,” Calhoun said.

Thankfully, last week’s suspension of at-sea turtle rescues has been lifted. Ziccardi wrote that a pilot program has been launched pairing sea turtle biologists with burn unit teams.  While the goal of the burns (which happen at an average rate of about 30 a week) is to consume oil before it makes landfall, the burns can hurt wildlife if animals caught in the sticky oil don’t get out before the oil is set on fire. Hopefully, with trained wildlife rescuers accompanying the trawlers, any turtles sheltering in oily sargassum can now be rescued before they’re lit on fire. Audubon’s Calhoun says she has around 90 turtles currently in oil rehab (66 of which are Kemp’s Ridleys) and has plenty of room to take more if they come in. The turtles can’t be released until NOAA clears their environment as safe, Calhoun says, so the turtles are just “hanging out” with conservationists for the present. There’s been thoughts of releasing them off the Eastern coast of the US, but turtles have an internal homing device that would likely re-route them back to the Gulf anyway, so they’ll remain in custody for now.

Although there are more than a hundred live sea turtles being rehabed, there are hundreds more dead sea turtles. 317 of these dead sea turtles are waiting to be classified as “visibly oiled” or “no visible oil” by Fish & Wildlife officials. These unclassified sea turtles are simply listed as “pending” in the daily wildlife collection reports, meaning there’s no way of knowing exactly how many sea turtles have died due to the spill. Hugh Morrison from the Gulf Joint Information Center says the backlog of “pending” turtles awaiting necropsies is a result of the assigned pathologist busily tending to live turtles. But, Morrison says, the necropsies are due to start this week. So if you see a sudden rise in the number of dead, oiled sea turtles reported in the media, it’s not because a large number of turtles have suddenly died. It’s just that authorities are only now getting around to counting them.