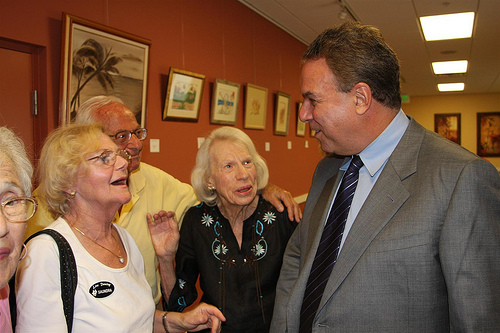 Weeks ago, political aspirants Rick Scott and Jeff Greene were long shots, outsiders, no-names. Scott is a Florida Republican running for governor, Greene a Florida Democrat running for US Senate. But Scott and Greene have something in common, a shared trait that’s propelling both men toward success in the Sunshine State: They’re stinking rich, and spending freely to boost their candidacies.

Their strategy looks to be working. A new Quinnipiac University poll shows both Scott and Greene leapfrogging their opponents in public support. After entering the race two months ago with meager public support and little name recognition, Scott now boasts 44 percent of support among Republican voters. That’s a 13-point lead over his challenger, Florida Attorney General Bill McCollum. (24 percent of Republican voters are undecided, the poll shows.) McCollum has the backing of the GOP establishment, and was considered the frontrunner until today’s poll. How, you ask, has the underdog surged so fast? So far, Scott, a former hospital CEO, has spent more than $12.5 million on his campaign, including a wave of ads plugging his support for an Arizona-like immigration law in Florida. McCollum has spent just $805,000.

Then there’s Jeff Greene, a billionaire real estate investor vying for the Democratic Party’s US Senate nomination. Here are a few details on Greene: Like the investors immortalized in Michael Lewis’ The Big Short, Greene cashed in betting against the subprime mortgage market. Boxer Mike Tyson was the best man at Greene’s 2008 wedding. Heidi Fleiss, the infamous madam to the stars, once shacked up in Greene’s guesthouse. He collects erotic art. Now, billionaire Greene, a relative unknown in Florida Democratic politics, is in a statistical dead heat with Rep. Kendrick Meek (D-Fla.), with Meek claiming 29 percent and Greene 27 percent. So far, Greene has spent millions on campaign ads.

Although Scott and Greene’s millions have boosted their polling numbers, paradoxically, their familiarity with voters remains low. Forty-six percent of Florida Republicans say they don’t know enough about Scott to form an opinion of him, while 64 percent of Democrats say the same about Greene. (By comparison, most Florida Democrats—59 percent—don’t know enough to form an opinion about Meek.)

Here’s the Washington Post‘s Chris Cilizza on the Scott-Green surge:

The rise of Greene and Scott speak to two realities: one new and one old.

First, the old. In large states with lots of media market where communicating is difficult, television is king. You can only meet so many Florida voters—even in a primary—and so the way you make an impact is through ads. And, when one candidate can write a check (or multiple checks) for millions of dollars while the his opponent has to scrape up donations in $2,000 or chunks, it is a major advantage.

The new(er) reality is that voters are really, really, really—we can’t emphasize that enough—sick of politicians who they believe have repeatedly failed them. In an anti-incumbent cycle like this one, people like Greene and Scott who have no voting record or even a set of past issue positions to defend have a far greater chance of succeeding.

The pervasive anti-incumbent sentiment I understand. But if it’s the deep-pocketed, well connected, corporate-linked establishment voters dislike, then they’re not getting much of a change in Scott or Greene, despite the barrage of ads and messaging these two candidates have unleashed to the contrary.

Typically, Scott has denied that his formidable campaign war chest has anything to do with it. “No one can buy an election,” Scott said recently. “When you walk into the voting booth, what you’re going to say is, ‘Which candidate is best for my family?’…They want somebody that’s run a business before.” Keep in mind, the hospital Scott ran was nabbed for alleged Medicare fraud, and forked over $1.7 billion to the feds resulting from the charges.

While Scott and Greene’s rapid success is startling, they’ve still got months to go before Florida’s August 24 primary. Time will tell whether they can keep up the spending barrage, or if the two cash-flush candidates peaked too early.