Hey, look what arrived in the mail! 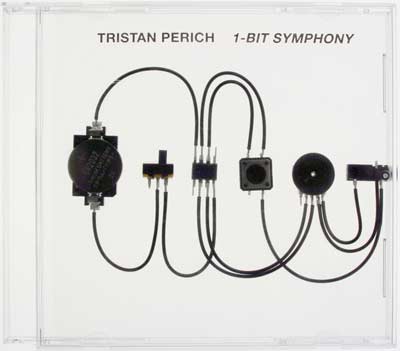 Look closely: This isn’t a CD. It’s actual circuitry embedded in a jewel case. Awesome! If you’re a musical artist struggling to grab the notice of busy reviewers, here’s one way to do it—so long as the postal authorities don’t mistake your thing for a bomb.

Now I must admit to having a small issue—literally—with the actual music. There are severe limitations when you’re composing 1-bit ditties. By necessity, it’s pretty cold, spare stuff: nitrous music for robot videos. (What’s nitrous music? It’s what I call stuff like this.)

Sure, 1-bit is kinda neat—even nostalgic for those of us who once ran out and bought the 8-bit Casiotone-VL1. (Here’s a blurry 15-year-old me holding one—wish

I still had it.) But despite the brief success of German band Trio, even 8-bit doesn’t encourage repeat listening—and 1-bit can be downright harsh. Just compare Fischerspooner’s original “Just Let Go” with Tristan Perich’s 1-bit rendition. (You might want to lower the volume just a tad.)

I do love the concept, though. Perich has been experimenting with the form for a number of years now. This particular—uh, what to call it?—circuit is billed “1-bit Symphony.” It will be offered in August by Cantaloupe Music, a New York label that puts out what was once called “experimental” and has been rebranded “new music”: acts like Matmos, which plays on found objects including—wow—cow uteruses. (Where does one even find a cow uterus?)

Alas, the only noise the above circuit made when I plugged in my headphones, threw the switch, turned up the volume, and pushed the black button was a faraway skittering sound—perhaps the battery was bad, because I don’t think even new musicians would release a faraway skittering sound and call it art. (Well, on the other hand…) In any case, you’ll find some fun stuff on Perich’s main website and also here, including 1-bit ensemble tracks like “Between the Silences” (9-piece strings), “Telescope” (clarinets and saxes), and “Interface” (string quartet).

Like most electronic music, it’s rather repetitive, but if you’re a fan of the genre then you’re probably cool with that. Just avoid “A/B/C/D,” a solo piccolo 1-bitter that for the entire first minute sounds uncannily like my home fire alarm. “Lit,” with its three soprano voices and piano, is actually quite pleasant. The only problem: “Lit” isn’t a 1-bit creation. But maybe that isn’t a problem. After all, there’s a reason that we moved out of our caves, invented the wheel, and developed sophisticated electronic instruments—leaving 1-bit tones for the greeting-card industry to exploit: It made us feel better.

When I crave nostalgia, I turn to my vinyl edition of Computerwelt.