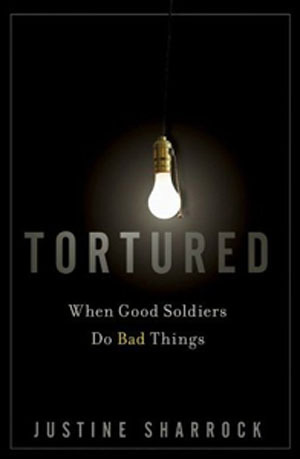 Using torture for interrogation isn’t new to the military. But the practices at the Guantanamo Bay detention camp, argues journalist Justine Sharrock, signal a shift in how that torture is being carried out and who’s doing the dirty work. During its interrogation of detainees at Guantanamo, the military often relied on inexperienced soldiers from lower ranks to implement torture tactics. In a conversation with The Rumpus about her book Tortured: When Good Soldiers Do Bad Things, Sharrock explains:

They’ve used no-touch torture before, but it was CIA agents who were more trained and more prepared to do this, whereas the low-ranking soldiers had no idea that this is what they were going to get into. So I think it had more of a profound effect on them, but I also think it’s an interesting way to look at how the torture regime has affected all of us as Americans.

Tortured examines three soldiers who realized that many of the orders they were carrying out—from waking up detainees constantly to “check for weapons,” to making them stand for hours on end—were forms of torture meant to hack away at prisoners’ minds. Not surprisingly, engaging in torture, even unknowingly, left devastating psychological scars on the soldiers. Says Sharrock:

One problem with working in the prisons is that you are face to face with the person you are breaking down over a long period of time. Whereas if you are sniper, you’re shooting at someone who’s really far away and who you only see for a second. No one has done any studies about how PTSD has affected soldiers who work in prisons as opposed to those out in the streets.

Read the full interview on The Rumpus and check out Sharrock’s book, Tortured: When Good Soldiers Do Bad Things, released in hardback today.