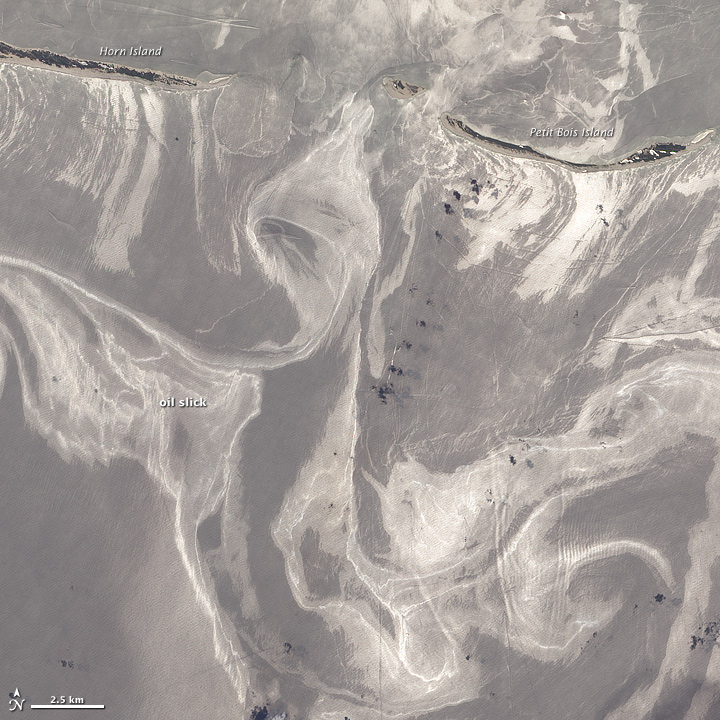 Here’s the shot from Earth orbit of the oil catastrophe off the Mississippi barrier islands on 27 June 2010. You can see a bigger image here. From the Earth Observatory explanation:

“As of June 27, 2010, the entire gulf-facing beachfront of several barrier islands in eastern Mississippi (offshore of Pascagoula) had received a designation of at least “lightly oiled” by the interagency Shoreline Cleanup Assessment Team that is responding to the disaster in the Gulf of Mexico. A few small stretches of Petit Bois Island had been labeled heavily or moderately oiled.

“This high-resolution image shows Petit Bois Island (top right) and the eastern end of Horn Island (top left) on June 26. In general, oil-covered waters are silvery and cleaner waters are blue-gray. This pattern is especially consistent farther from the islands. The intensely bright patches of water directly offshore of the barrier islands, however, may be from a combination of factors, including sediment and organic material, coastal currents and surf, and oil.

“The islands provide a sense of scale for the ribbons of oil swirling into the area from the south. Petit Bois Island is about 10 kilometers (6 miles) long. It is one of seven barrier islands that, along with some mainland areas of Mississippi and Florida, make up the Gulf Islands National Seashore. According to the National Park Service Gulf Islands National Seashore Website, all the islands remained open to the public as of June 28, 2010, and clean-up crews were on hand to respond to any oil coming ashore.”