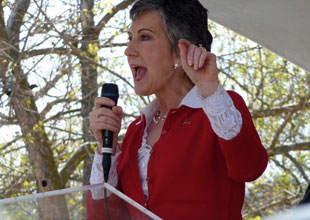 With the BP oil spill, the nation is currently witnessing one of the worst acts of corporate negligence—or crime—in history. This eco-nightmare is occurring during a time of economic trouble triggered by brazen corporate malfeasance in the financial sector. So it might not be a good moment for a politician to be a CEO. Yet in California, Republican voters on Tuesday flocked to two self-financing ex-corporate honchos, selecting ex-eBay CEO Meg Whitman to be the party’s gubernatorial candidate (to face onetime Democratic governor and current state Attorney General Jerry Brown) and picking ex-Hewlett-Packard CEO Carly Fiorina to be the party’s senatorial candidate (to take on Democratic Sen. Barbara Boxer). Whitman might make some sense as a candidate, given that she left the corporate world with a solid reputation, having presided over massive growth that brought eBay from a company of 30 employees to one of 15,000 workers (though she engaged in controversial “spinning” while a member of the board of Goldman Sachs.) Yet Carly Fiorina had a controversial, if not troubled tenure, at HP. Which raises the question: what are Californian GOPers (and Sarah Palin) thinking?

Fiorina, a marketing and sales expert, took over HP in 1999, as the tech boom was ending. Her solution to the company’s many problems at the time was engineering a $19 billion acquisition of Compaq—a move opposed by many HP stockholders and that ultimately was not widely regarded as a slam-dunk. On her watch, HP downsized and canned almost 18,000 employees—as Fiorina joined with other corporate execs to defend outsourcing and oppose measures that would limit this practice. After six years in the job, she was pushed out, but her departure was eased by a $21 million severance package. On the day she was dumped, the company’s stock price went up 7 percent. CBS News technology analyst Larry Magin noted,

There is plenty to criticize about Fiorina’s tenure at HP. At this point, the changes that Fiorina made didn’t turn out so well for the thousands of Hewlett-Packard and Compaq employees that were laid off and the millions of HP stockholders who lost equity since she took over. HP stock is worth less today than it was in 1999. Dell and IBM stock has increased in value.

Fiorina ended up symbolizing not one but three excesses of the corporate elite: mergers-and-acquisition mania, outsourcing, and golden parachutes. Yet during the Republican Senate campaign, this former corporate insider re-marketed herself as an anti-establishment Tea Partier, even though one of her foes in the primary contest, Assemblyman Chuck Devore, had a stronger claim on the Tea Party label. (Fiorina was helped in the who’s-the-Tea-Partiest-of-them-all competition when Palin endorsed her.)

It is possible that by aligning herself so closely with the Tea Partiers—as she spent large sums of her own money to win the nomination—Fiorina has diminished her chances of clearing out Boxer. Fiorina has campaigned as a diehard conservative, but in the Golden State, far-right GOPers often do not win statewide contests. (Republican Governor Arnold Schwarzenegger has been a national voice for climate change action; Fiorina recently released a demagogic ad blasting Boxer’s concern about climate change, comparing it to worrying about the weather.) Fiorina has so far played according to the basic rule of politics: in the primary, cater to the base, then in the general election move toward the center. But having veered so far to the right—she ran as a pro-lifer—she has plenty of ground to cover to reach the middle. Boxer, always a feisty campaigner, will spend much time and money in the coming months to remind California voters of Fiorina’s Tea Party stylings. Also, this Senate primary suggests that the Tea Party may not be so potent in California. Were it so, DeVore, the genuine Tea Partier, could have better surfed the movement’s anger, a la Rand Paul in Kentucky.

Moreover, a Washington Post/ABC poll released this week shows that a growing number of Americans are not fans of the Tea Party. In March, 39 percent said they had an unfavorable impression of the Tea Party. Now, it’s 50 percent. The percentage of people with no opinion of the Tea Party fell from 20 percent to 14 percent. This indicates that the more people learn about the Tea Party, the less they like it. That’s no surprise. As Tea Party-fueled Republicans receive more attention—especially on issues other than President Barack Obama’s controversial health care reform initiaitve—the brew doesn’t seem so tasty. After all, Rand Paul noted he didn’t support the entire 1964 Civil Rights Act and griped about Obama being too tough on BP (whining that this was un-American). Sharron Angle, the Tea Party favorite in the Nevada GOP Senate primary, called for shutting down the Environmental Protection Agency and the Department of Energy. (While there’s an oil spill of historic proportion?) Other Tea Partiers are urging repeal of the 17th Amendment (which mandates the direct election of senators).

Come November, the Tea Party tag might not be a winner—and a former but failed corporate titan who wrapped herself tight in its banner might not be seen by voters as the most compelling choice, even in a year of anti-incumbent fervor. Perhaps Fiorina, that onetime marketing wiz, will have to fire up one more rebranding campaign.