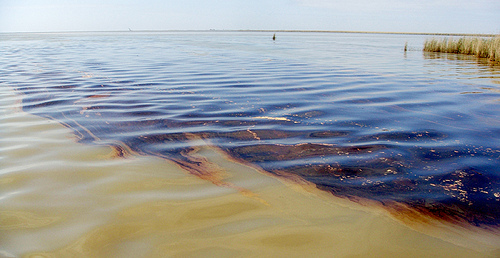 Not only is BP’s 49-day-old oil spill in the Gulf of Mexico the worst in US history, its after-effects—especially the moratorium on offshore drilling instituted by President Obama in May—could lead to a crippling economic disaster in the Gulf Coast region, if not the country. In a worst-case scenario, if the spill continues to shut down local industry deep into this fall, experts in the Gulf coast region say the Deepwater Horizon calamity could pave the way for a double-dip recession.

Among the sectors facing shutdown stemming from Obama’s moratorium are Louisiana’s oil and gas, fishing, and tourism industries. Yet, as NPR’s John Ydstie reported today, the woes of those industries will ripple throughout Gulf Coast states’ economies, hurting everyone from tug boat captains, boat engine repairmen, hotel operators, to bar owners. As Ydstie reported, the oil and gas industry makes up 16 percent of Louisiana’s GDP; tourism and fishing comprise 4 percent and 1 percent, respectively. The state’s economic development organization estimates that 20,000 jobs could be lost, and the Tulane University Energy Institute went so far as to say that the spill’s economic reverberations could cause a double-dip recession. (Analysts with Moody’s Economy.com denied that claim, NPR’s Ydstie says.) “Guys that sell maintenance and repairs, guys that sell engines—there’s lots of banks out there who only loan money to the oil and gas sector,” Shane Guidry, chairman and CEO of Harvey Gulf International Marine, told NPR. “They’re going to be affected. I mean, it just goes on and on and on. Carmakers—people won’t be buying cars, houses…They won’t have jobs to pay for it.”

All of this leaves Obama in a nasty pickle. He had practically no choice, in the spill’s aftermath, but to place a temporary moratorium on offshore drilling. (Though that hasn’t completely stopped the practice.) But in doing so, he risks partly undermining his own efforts to stabilize the economy and add jobs to the workforce each month—not eliminate them. And job creation, at least in the private sector, is something the president’s having enough trouble with already. Obama has said he would consider ending the moratorium early based on the findings of a commission studying the spill, but if he does, the move will certainly rile up environmental groups who want an end to offshore drilling altogether. He’s stuck between a rock and a hard place, with few good options anywhere he looks.