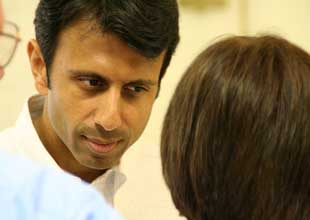 In the ongoing fight against the Gulf’s oil gush, Louisiana governor Bobby Jindal has emerged as the media’s unlikely man of the moment. Politico notes that the Republican governor has “flung himself into the crisis, enduring dawn to dusk hearings on the fine points of the spill.” According to The New Republic, Jindal has “quickly mastered the details of the issue” and “displayed the kind of smarts and ideological flexibility that we should applaud in our leaders, no matter the party.”

Of course, Jindal hasn’t limited himself to mopping things up; he’s also doing more than anyone else in the GOP to tar the White House’s disaster response. He claims that the federal government lacked a detailed response plan, still hasn’t filled a request that he made in early May for more boom to contain the oil slick, and is pointlessly preventing him from building barrier islands that he says would protect the state’s marshes (a line of attack echoed by none other than Sarah Palin). After meeting with Obama on Friday, Jindal told Fox News that “we don’t understand why our federal government would be making excuses for BP.”

Jindal’s outrage is understandable and even admirable in the sense that he’s not afraid to sound like an environmentalist. But the media’s panegyrics have ignored Jindal’s own weak response to the oil spill and his outsized role in promoting the kind of regulatory cutbacks and dangerous offshore drilling policies that are now wrecking Louisiana’s economy.

In February, 2006, while serving as a member of the GOP-controlled US House of Representatives, Jindal introduced the Deep Ocean Energy Resources Act. Passed by the House a few months later, the bill would have opened up the entire US coast to offshore oil drilling. States could override the law and ban rigs in their territorial waters, yet the law would let them share lease royalties with the federal government–a strong incentive to drill. Adjacent states would have little say in the matter (clearly a problem, given that BP’s spill has marred several states’ coastlines). On the risks of deepwater drilling, the text of Jindal’s bill is comically pollyannaish:

(4) it is not reasonably foreseeable that . . . development and production of an oil discovery located more than 50 miles seaward of the coastline will adversely affect resources near the coastline;

(BP’s Deepwater Horizon rig is located 50 miles from the coast, and of course would have devastated the Gulf even if it was further out to sea).

Even back in 2006 the Deep Ocean Energy Resources Act was too politically radioactive to pass the Senate, so Jindal eventually threw his weight behind a more limited bill authored by Democratic senator Mary Landrieu. The Gulf of Mexico Energy Security Act, which was signed by George W. Bush that December, gave states a cut of offshore oil royalties in exchange for opening up 8.3 million acres of the western Gulf to drilling, including 5.8 million acres that had previously been set off-limits by Congress.  “We’ve told them at the very least to go ahead and vote on the Senate bill,” Jindal told New Orleans City Business. “We’re on the 1-yard line at this point. We just have to go ahead and get this done.”

In March 2008, Bush’s interior secretary, Dirk Kempthorne, announced the first sale of an oil lease under the new law. On the block that day was also Lease Sale 206, the parcel that BP snatched up and later converted into a fountain of oily havoc.

As Jindal was pushing to radically increase offshore oil drilling (while accepting more than $100,000 from oil and gas companies), there’s no indication that he saw the slightest need to increase government oversight. His stated governing philosophy is deeply anti-regulatory. In March, 2009, he said: “There has never been a challenge that the American people, with as little interference as possible by the federal government, cannot handle.”

The BP calamity has proven otherwise, yet Jindal seems to have been slow to learn the lesson. Early on, Louisiana State Representative John LaFonta introduced a resolution in the state legislature to investigate Jindal’s “slow” response to the disaster. Though the resolution hit a roadblock, LaFonta describes Jindal’s feet dragging in detail in the Baton Rouge Business Report:

. . .[L]ocal officials in some coastal parishes wanted to start putting out protective boom almost immediately after the Deepwater Horizon explosion because they knew the rig would likely collapse and cause an oil spill. The program officials wanted would have cost $1.3 million, but Jindal balked at the expense and instead waited to act until days later, when BP officials had confirmed the well was leaking, LaFonta says. Two Jindal spokesmen contacted for this story did not submit a response to that claim.

And that’s not all. LaFonta criticizes Jindal for moving the Louisiana Oil Spill Coordinator’s office from his direct oversight into “a basement in Facility Planning” at the Louisiana Department of Public Safety and Corrections. And Jindal would not tell the Baton Rouge Business Report why he never developed a detailed “worst-case” oil spill response plan before the disaster.

On Wednesday, Jindal sent a letter to President Obama urging him to lift his temporary moratorium on deepwater drilling in the Gulf of Mexico. He accused Obama of pursuing a policy that “could kill thousands of Louisiana jobs” and urged him to “quickly ensure that all deepwater drilling is in proper compliance with federal regulation and is conducted safely so that energy production, and more importantly, thousands of jobs, are not in limbo.” Yet it until federal investigators determine exactly what went wrong on the Deepwater Horizon, it will be impossible to know whether current regulations are sufficient to ensure that oil rigs are operating safely. According to the Huffington Post, of the 33 deepwater drilling rigs that Jindal wants to continue operating, four are operating under BP leases or leases jointly controlled by BP and Devon.

Jindal’s celebrated conservative apostasy might be more notable if, instead of just responding to the crisis and criticizing BP and the federal government, he offered a true mea culpa and openly renounced the political views that precipitated the crisis. Few elected officials have clean hands here, least of all an anti-regulatory lawmaker who proposed planting Deepwater Horizons coast to coast.