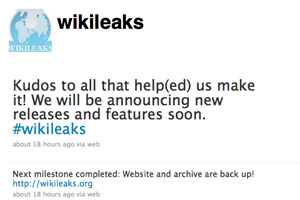 There’s a lot of people who’d like to shut down WikiLeaks, the now-famous whistleblower site that recently posted video of two journalists being gunned down by a US helicopter in Iraq. But so far, the only group that’s ever taken down WikiLeaks is WikiLeaks itself. Earlier this year, the site’s giant repository of leaked documents (and most of its mirror sites) went dark as part of a $600,000 fundraising drive. It was a bit ironic, considering that one of WikiLeaks’ claims to fame is that once it posts a document, “it is essentially impossible to censor.” For more than five months, if you wanted to peruse its exclusive stash of Scientology tracts, Sarah Palin’s hacked emails, or Guantanamo detainee manuals, you were out of luck.

Now the fundraiser is over and WikiLeaks’ main site has emerged from hibernation. All the old documents appear to be there. But there are some notable changes. When MoJo contributor David Kushner was profiling WikiLeaks founder Julian Assange, he contacted some of the people named as advisors on the previous version of the WikiLeaks site; they said they didn’t know why they’d been listed there. The new site does not list any advisors.

The new site also details the lengths WikiLeaks goes to in order to verify its leaks, boasting that “we have yet to make a mistake.” A 2008 version of the site took the opposite tack, asserting that “Wikileaks does not pass judgement on the authenticity of documents.” Likewise, WikiLeaks used to call itself the “uncensorable version of Wikipedia.” The new site states, “WikiLeaks is not like Wikipedia.” One WikiLeaks-watcher found that the new site does not allow new user comments on previously posted leaks, griping: “There is no wiki in WikiLeaks.org.”

Hey, organizations change. What hasn’t changed is WikiLeaks’ obsessive insistence on self-definition. Its evolution into a newly media-savvy (not to mention image conscious) organization is evident on its media page, where it instructs journalists:

WikiLeaks should be described, depending on context, as the “open government group”, “anti-corruption group”, “transparency group” or “whistleblower’s site”.

WikiLeaks staff should be described, unless otherwise specified and depending on context, as “investigative journalists”, “analysts”, “technologists”, “open government activists” or, especially in an African context, “anti-corruption activists”.

Whatever you want to call ’em, they’re back.