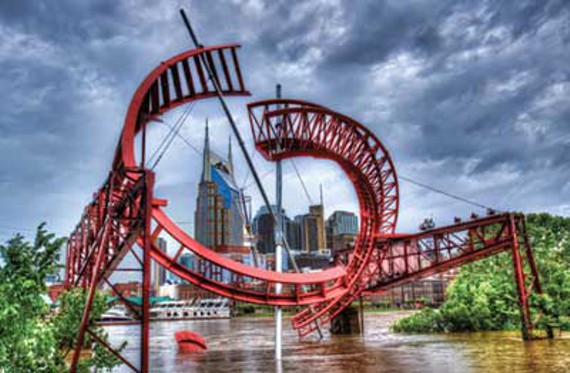 Tennessee has a problem, and it’s not the massive May Day flood damage. It’s the people: They’re so damn nice to each other in a crisis that they think FEMA and the rest of the country might pitch in without being asked. (There’s a reason it’s called the Volunteer State.)

So far my hometown’s optimistic view of Yankee nature isn’t working out too well. Unhelpfully, the nation’s TV cameras are still turned towards the Gulf oil spill and Times Square bomb scare. Until a point tips, Nashvillians on Facebook half-jokingly discuss “waiting for Sean Penn or George Clooney to decide that they should care about this so everyone else will start.”

Seriously, do you know how badly damaged Tennessee is from Saturday’s flood? Nashville alone got three full months of rain in 48 hours. Twenty people died (and counting). Days after one of the worst deluges in Nashville’s recorded history, thousands of people are out of power and whole neighborhoods are still underwater or homeless. Plus, one of the city’s two drinking water treatment plants have been compromised by flood damage, so people are being told to “delay showering or washing dishes” to avoid a potable water shortage. In any other news cycle, Anderson Cooper would already be down there interviewing country music icons, right?

Here’s how you can help the flood victims if you’re interested.

And here are two videos if you want a quick Red State primer on the flood, how Tennesseans think about the flood, the Nashville Weather Penis, and the imminent “Obama Hates White People” meme: