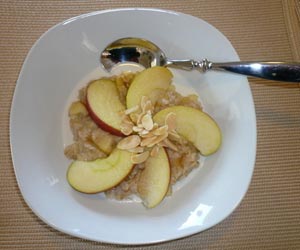 All of a sudden, steel-cut oatmeal is everywhere. Within blocks of MoJo‘s San Francisco headquarters, it’s sold at upscale touristy cafes and chain places like Starbucks and Jamba Juice. Hard to resist, since I a) am a sucker for fancy toppings (warm apple compote, anyone?) and b) find the texture and flavor of steel-cut oatmeal far superior to that of the boring quick oats I keep at my desk: Steel-cut oatmeal is chewier and, to my taste, slightly toastier than the instant stuff. The problem is that the prepared version is pricey and overpackaged: usually around $3 for a small paper container with a lid. Dry steel-cut oats are cheaper and require less packaging, but they take 20 minutes to cook, which isn’t really feasible at the office. Looking for an excuse to indulge in the tasty stuff once in a while, I decided to do some research: Is there any evidence that steel-cut oatmeal is more nutritious and/or better for the planet than instant rolled oatmeal?

Proponents of diets based on the glycemic index often claim that steel-cut oats have a lower glycemic load than rolled oats, meaning they’re less likely to cause a blood-sugar spike. But this side-by-side comparison of 40 grams of Quaker steel-cut and rolled quick oats would suggest that nutritionally, the two are pretty identical (though mysteriously, the quick oats have slighly more fat than the steel-cut oats).

On the environmental front, things get a little more complicated. Obviously, the take-out packaging is a major concern. But let’s say I stop being lazy and wake up early enough make my own steel-cut oats at home: Quaker Oats spokeswoman Candace Mueller explained to me that the only difference in how the two kinds of oats are produced is in the very last step: Once they’re cleaned and dehulled, the oats get cut. After that, steel-cut oats are all done, but rolled oats go on to get flattened (the flatter the oat the quicker it cooks) and steamed in rollers. A 2009 study (pdf) conducted by Unilever and the NewZealand research group AgResearch found that rolling and steaming is by far the most energy-intensive part of the oat milling process—about 19 times moreso than the second most costly step, which is dehulling. “So from a pure manufacturing standpoint,” Mueller says, “just cutting uses less energy.”

But Mueller also points out that since steel-cut oats are thicker, they require about 20 minutes of simmering on a stovetop, while thin instant rolled oatmeal takes only a minute. “If you look at total energy to the point of consumption, I would expect that based on our more efficient precooking as part of rolling (we add water and steam during rolling) versus stovetop, rolling is more efficient,” says Mueller.

That could be true, if the plant actually is very efficient, says Helene York, a food journalist and director of Bon Appétit Management Company, the sustainable catering group responsible for this cool food emissions calculator. “Twenty minutes in a highly efficient plant could actually use less fossil fuel energy (and cause fewer emissions) than one minute at home if the heating source at home weren’t efficient,” says York. But she points out there are other concerns, too: Is cleaning the kettle at home more or less efficient than cleaning the rollers? And which scenario creates more wasted oatmeal?

Bottom line: Nutritionally and environmentally speaking, steel-cut and instant rolled oats are pretty darn similar. “Because oatmeal isn’t a food with a high global warming potential, then it’s fair to assume that the differences probably don’t matter much,” says York. The good news is that compared to other breakfast foods, oatmeal looks like a veritable saint: As I reported in a previous Econundrum, its environmental impact is dwarfed by that of breakfasts that include eggs or meat. Oatmeal’s arguably healthier, too, since it’s lower in cholesterol and fat and higher in fiber than eggs and meat. (Cue Wilford Brimley.)