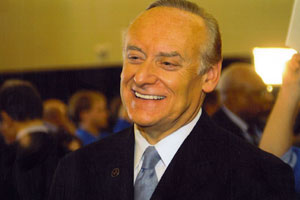 Tuesday’s primary elections in Ohio, Indiana, and North Carolina produced few surprises. (I previewed the races yesterday.) In the Buckeye state’s Democratic Senate primary, Lt. Gov. Lee Fisher, the favored candidate of the DC Democratic establishment (and Gov. Ted Strickland) beat Secretary of State Jennifer Brunner by 10 points. Fisher will face Bush budget director Rob Portman and his $7.6 million war chest in November. The most interesting thing to watch here is whether Brunner will back Fisher in the general election. Brunner had previously said she would not support Fisher if he won, and she may make it harder for him to lock down liberals if she keeps her word.

In Indiana, GOP establishment candidates held on—barely—across the state. Former Sen. Dan Coats, heavily criticized for his time as a Washington lobbyist, took home just 39 percent of the vote in the Republican primary for the Senate seat being vacated by retiring Dem Evan Bayh. That was enough to win the race, but the poor performance earned Coats mockery from the Democrats. The Democratic National Committee sent out an email blast quoting news reports about Coats’ win: “Not ‘overly impressive,’ Republicans Not ‘ready to embrace Dan Coats as a returning hero,’ Result ‘Humbling.’ The Dems’ crowing is unsurprising: they were happy to see Coats win, because they think that running against Coats (and his lobbying) gives their candidate, moderate Rep. Brad Ellsworth, the best chance of winning the seat.

On the House side, GOP incumbents and former officeholders struggled to fend off primary challenges from enraged conservative activists. Fourteen-term Rep. Dan Burton, who faced the toughest challenge, earned just 30 percent of the vote in his primary. But in a seven-way contest, that was enough—Burton edged onetime state Rep. Luke Messer by two points and will be favored to win a fifteenth term in the fall. Rep. Mark Souder, like Burton, faced several conservative challengers who split the vote against him. He won his primary with a plurality—48 percent—but was 14 points ahead of his nearest challenger, Bob Thomas. Elsewhere in the Hoosier state, former Rep. Mike Sodrel failed in his bid to face Dem Rep. Baron Hill for an almost unprecedented fifth time. (Sodrel was 1-3 in four previous tries.) Sodrel finished a dissappointing third in the primary, which was won by attorney Todd Young.

In North Carolina, there were six candidates in the Democratic Senate primary to face incumbent Republican Sen. Richard Burr. Elaine Marshall, the secretary of state (and the candidate favored by progressives) beat state Sen. Cal Cunningham, 36 percent to 27 percent. But Marshall wasn’t able to hit the 40 percent cutoff required to avoid a June run-off. Cunningham and Marshall will campaign for another month before facing the primary electorate again on June 22, when the Dems will finally have a candidate.