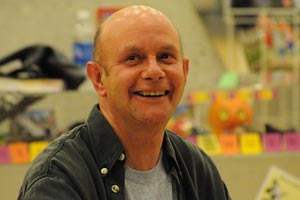 For a special section in our May/June issue, we asked some of our favorite writers about their favorite nonfiction books. Here are novelist and essayist Nick Hornby’s answers:

Mother Jones: What nonfiction book do you foist on friends and relatives?

Nick Hornby: Historically: Tobias Wolff’s This Boy’s Life. It was one of the books that taught me how to write—not that this should be of any interest to friends and relatives. I give it to them because it’s beautiful, funny, and tough. More recently: Mark Harris’ Pictures at a Revolution, which is the best, and most enjoyable, book about movies I’ve read for years, and maybe ever.

MJ: What work of nonfiction have you reread the most, and what’s the allure.

NH: I’m really not a big rereader—I’m too aware of my own ignorance. I’ve read Greil Marcus’ chapter on The Band in Mystery Train more than twice, however. It’s one of the pieces of writing that made me such an Americophile—and it’s just so smart and fizzy.

MJ: Can you think of a nonfiction book someone handed you as a kid that left a lasting impression?

NH: I can only recall being given dictionaries and encyclopedias. I can remember my father gave me a huge history of football for my 12th birthday—I used to read that a lot. I can remember thinking it was cool that something I was interested in even had a history. Most things I loved didn’t.

MJ: What are the best music-related memoirs you’ve ever read?

NH: Dylan’s Chronicles is easily the best rock ‘n’ roll memoir ever written, as far as I’m concerned. There aren’t many stories in there, but if you want to know where an artist came from, and why he thinks the way he does, then that’s the one. For stories you need The Dirt, the book about Motley Crue.

MJ: Who’s your Tucker Crowe? Not trying to suggest that you’re an obsessive, pathetic music nerd, but is there any (obscure?) musical figure you find endlessly intriguing? [In Hornby’s latest novel—Juliet, Naked—a key character is unhealthily obsessed with Crowe, a reclusive ex-musician.]

NH: David Kynaston, author of the recent, and astoundingly good, Austerity Britain and Family Britain. He’s writing a sequence of books that will
take us up to 1979, and it seems to me that he knows more about the recent history of this country than anyone alive. I’d like to ask him where we’re going. Living musicians: Bobby Womack must have some stories. He embodies almost the entire history of R&B.