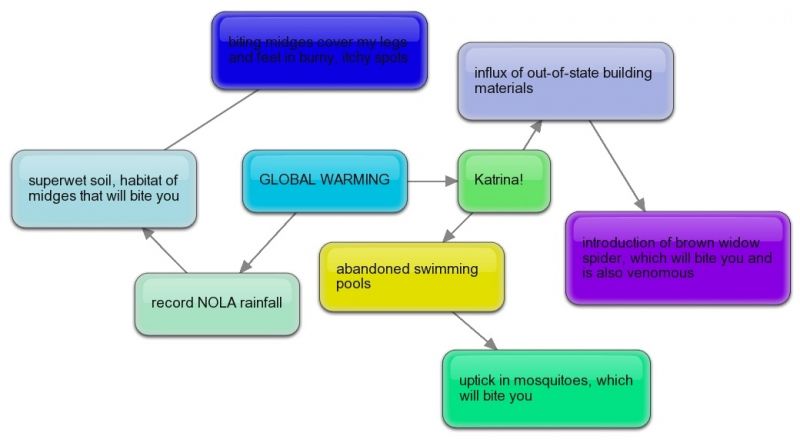 The first thing I did when I got to New Orleans a week and a half ago, obviously, was walk barefoot onto a porch and have a cocktail. Which is to say that the second thing I did was incur a rash of insect bites that completely covered my feet, ran up my legs, didn’t start itching and burning for about 30 hours, and then caught fire in a manner ferocious enough to keep me awake at night for five days.

I started looking for ways to blame my Louisianan misfortune on Bobby Jindal. A little research did help me cast my accusations in the direction of anti-climate-change-policy haters/global warming deniers/irritating politicians in general. My attackers, it turns out, were the nearly invisible and initially unfeelable Leptoconops torrens, nasty little biting midges that thrive in wet soils. And people who impede progress to combat climate change = exacerbated climate change = the wettest weather on record in New Orleans recently = my very immediate plight. You may also remember climate change from such disasters as Hurricane Katrina. Post-Katrina, the still-abandoned swimming pools are causing an increase in mosquito populations, says an entomologist at the Audubon Insectarium. He also says that reconstruction materials rushed in without inspection from states like Florida brought poisonous brown widow spiders, which have since thrived in deserted houses.

There are more significant points to be made about the human cost of global warming, like sea-rise refugees and we’re all going to get dengue fever  and malaria, etc—even right here and now, farmers are suffering as the decline in fire-ant populations after Katrina’s storm surge begat more sugarcane borers, which caused a loss to the state sugarcane industry of up to $3 million in 2006 alone. But for the moment, and with the inspiration of another cocktail, I’ve focused the ways in which global warming is personally complicating my life, and the life of everyone in New Orleans who’s trying to drink on their porch in peace, into a flow chart. Click here to behold.