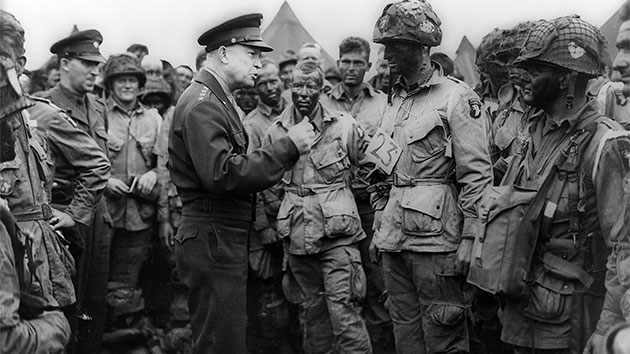 On June 5, 1944, the eve of the largest invasion in history, General Dwight Eisenhower visited the English airfield where U.S. paratroopers were preparing to take off for their drop into France. “Quit worrying, General,” one of the soldiers told him. “We’ll take care of this thing for you.’’ The following day, 175,000 men landed on the beaches and fields of Normandy.

For children growing up in Washington, D.C., shushed into silence behind the blackout curtains while our parents bent over radios bringing the long-awaited announcement of the attack, it was all beyond  comprehension–save that every little boy was climbing into a tree to pretend he was flying his Spitfire over the Channel, or parachuting into the French countryside.

At age seven, I was one of those boys. Last week I had the good fortune to meet another member of my generation, whose experience of D-Day was something quite different. His name is Pierre Bernard, and he is retired to his family’s farm in the village of Maisons, a stone’s throw from the beaches that became the site of what the French call the Débarquement. In the spring of 1944, Pierre was 12; with his parents and siblings, he worked the farm and waited for the Allied troops to arrive and free them from Nazi occupation. When that day finally came, Pierre recalls, the Germans simply vanished. British and then American troops soon passed through the village, moving quickly inland. His family was luckier than many others: Some 12,000 French civilians were killed during the battle for Normandy, along with more than 75,000 troops on both sides.

Today, long retired from his job as a cook in Paris, Pierre oversees a bed and breakfast in his old stone farmhouse. He’s never learned to use a computer, so his daughters help arrange who is to come, while Pierre, along with his two dogs, goes out each morning to bring back fresh baguettes and croissants. He serves them along with the jams and pates he makes himself, and sits quietly at the head of the family table, contentedly watching his guests eat breakfast.  And he’ll gladly trades war stories with a visitor who, like himself, is too young to have fought, but old enough to remember.

Normandy today still inspires awe at the courage of the men who stormed Fortress Europe: Omaha Beach, so wide and unprotected; the cliffs of Point du Hoc, higher and steeper than I could have imagined. But by now, the genuine remnants of the war–half-buried German bunkers, wrecked ships, and thousands of well-tended graves–are far outnumbered by nostalgic renderings of the real thing: Army surplus stores are filled with Eisenhower jackets, berets, and rucksacks (many of them supplied by German companies). Towns compete for tourists–and a place in history–with tanks on their village squares and little museums dedicated to every aspect of “Jour J.” In Sainte-Mère-Église, where an American paratrooper famously got caught on the church steeple, a dummy is suspended from a parachute to commemmorate  the event. Then there are the British and American visitors tearing around in rented World War II jeeps, windshields down, and even a half-ton olive drab truck.  They look far too young to be veterans; too young even to have been alive at the time. The men and women who fought that war are fast disappearing (some 850 U.S. WW II vets die every day, according to the VA), and those who lived through it as children are now well into our old age.

I was struck by how different Pierre’s old age in France is from mine in the United States—not because of anything that happened during the war, but because of what happened afterwards. In the postwar years, along with most other European countries (victors and vanquished alike), France implemented guaranteed pensions as well as national health care. Under a social welfare system that epitomizes what’s derisively referred to in the U.S. as the “Nanny State,” the average worker in France retires at age 60 on a full pension with complete medical care and various tax breaks. (And that’s after years of working 35-hour weeks, with two-month vacations.)

And what about aging Americans–including the waning ranks of the “Greatest Generation” that preceded my own, who helped free the French and the rest of Europe, and then financed the continent’s recovery through the Marshall Plan? What can we expect? The most minimal of public pension systems, which was created before the war and has been under attack ever since; a private system that is now a shell of collapsing structures; personal savings decimated by Wall Street; and a partial and increasingly expensive health care system. More and more of us plan to work quite literally until we die–that is, if we can manage to keep our jobs, since we have little protection against age discrimination, and no job security of any sort. In America, the war fought by “Citizen Soldiers” made our world all too safe for wealth and corporate power, often at the expense of the very men and women who won it.

In France, conservative President Nicolas Sarkozy has been chipping away at the Nanny State. His latest scheme—to raise the retirement age to 62—brought mass demonstrations across the country, and threats from the still-powerful unions. Even if Sarkozy’s latest initiative succeeds, as it well may, France’s elders will still be better off than their American counterparts have ever been.

Here in the U.S., we face a political juggernaut–most recently manifested in Obama’s “debt commission”–intent on cutting Social Security benefits, raising the costs of Medicare, extending the formal retirement age from 65 to 67 and beyond, and further tying our retirement and that of future generations to the vicissitudes of the securities markets through 401Ks and IRAs. Few voices are raised in protest against this attack on old-age entitlements. In fact, it seems to be one of the only true examples of bipartisanship in American politics, now that the Democratic Party, which once fought to build what social safety net we have, has collapsed into the arms of Wall Street. I expect it will progress with no more difficulty than “welfare reform,” in which another Democratic administration gutted our meager provisons for the poor.

In a Washington Post op-ed last Sunday, American Enterprise Institute president Arthur C. Brooks declared that “America’s new culture war” is a “struggle between two competing visions of the country’s future. In one, America will continue to be an exceptional nation organized around the principles of free enterprise–limited government, a reliance on entrepreneurship and rewards determined by market forces. In the other, America will move toward European-style statism grounded in expanding bureaucracies, a managed economy and large-scale income redistribution.” If only this were remotely true.  In fact, that battle was lost long ago–if it was ever fought at all.

Perhaps I only imagine that Pierre’s life is more tranquil than mine because he enjoys the security that comes with “European-style statism,” while my own well-being remains “determined by market forces.” But I don’t think so. Sixty years ago, as a small boy playing pilot in the lush green trees of a Washington spring, I couldn’t have guessed that Pierre, waiting in his farmhouse nestled in the hedgerows of Normandy for the jeeps and tanks of the First Army, would someday become a symbol not only of my country’s greatest victory, but of its saddest defeat.