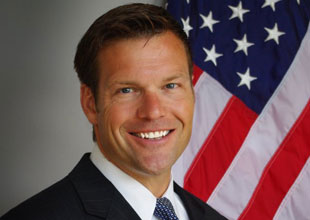 When Arizona passed a law that handed local police unprecedented authority to investigate and arrest suspected illegal immigrants, the state ignited a firestorm in a midterm election year. And for Kris Kobach, the former Bush administration lawyer who helped draft the legislation, the crackdown in Arizona is just the beginning.

A telegenic law professor with stellar academic credentials—Harvard undergrad, Yale Law School—Kobach has been the brains behind similarly tough local-level immigration measures and legal actions across the country. And he says he’s discussing with officials about whether measures similar to the Arizona law could be passed elsewhere. “I have been contacted by legislators in other states…with questions about the Arizona statutes,” Kobach says in an interview. He won’t reveal where most of these inquiries were from, but said he was talking to state legislators in Kansas—where he’s also running for secretary of state this fall. Already, state and national lawmakers in Oklahoma, Ohio, North Carolina, and Georgia have vowed to pass copycat measures.

Kobach denies that he’s the mastermind behind any of the anti-immigration laws he’s drafted or defended. Rather, he insists he simply assists officials who are already committed to tougher enforcement policies. “I did not generate the motivation to pass the law…I am merely the attorney who comes in, refines, and drafts their statutes,” he says.

But advocates on both sides of the immigration debate agree that his influence has been far-reaching. Rosemary Jenks of NumbersUSA, an anti-immigration group, calls Kobach “instrumental in helping states and localities deal with the federal government’s authority.” Vivek Mahotra, a lawyer from the American Civil Liberties Union, which has frequently tussled with Kobach in court, says, “What Kris Kobach has done as a lawyer is really gone out to localities around the country and really used them as experimental laboratories for pushing questionable legal theories about how far states and local governments can go.”

Kobach, 44, has spent much of his professional life developing the legal framework that a growing number of state and local officials have used to justify anti-immigration proposals. A rising star in the GOP establishment, Kobach—a professor at the University of Missouri-Kansas City Law School—joined John Ashcroft’s Justice Department days before 9/11. Over the next two years, he helped create a program that required all visiting citizens from 25 mostly Arab countries to be fingerprinted and monitored—a policy that critics said amounted to racial profiling.

During these years, Kobach advanced an idea that had long been circulating in conservative legal circles: that local and state officials have the “inherent authority” to enforce federal immigration laws. This unorthodox notion bucked the prevailing view—long held by both Republican and Democratic administrations—that the federal government has principal jurisdiction over immigration under the Supremacy Clause of the Constitution. If local and state governments were to strike out on their own, they could undermine federal efforts, create the potential for draconian crackdowns, and detract from law enforcement efforts by discouraging immigrants from cooperating with police, critics argue. In 2002, however, Ashcroft’s Office of Legal Counsel issued a memo, which Kobach contributed to, supporting the “inherent authority” theory.

In the years since, state and local officials have deployed that rationale to devise their own anti-immigration policies without direction from the federal government—often with help from Kobach himself. After leaving the administration in 2003, Kobach went on to work with a number of local governments and officials around the country on immigration matters—sometimes operating independently and sometimes working with groups like the Immigration Reform Law Institute. IRLI was founded by the Federation for American Immigration Reform (FAIR), a group that aims to reduce both illegal and legal immigration. FAIR has been criticized for its ties to controversial activist John Tanton (who once asked, “As Whites see their power and control over their lives declining, will they simply go quietly into the night?”) and the Pioneer Fund, which has its origins in the eugenics movement. Calling the charges against FAIR “an absurd smear of six degrees of separation,” Kobach has disavowed any connections to hardline nativists.

Arizona state officials first retained Kobach in 2006 to defend a law that made immigrant smuggling a state crime. That initiative was spearheaded by the now-infamous Sheriff Joe Arpaio, whose heavy-handed tactics against prisoners and immigrants in Maricopa County have been the target of thousands of lawsuits, as well as a Department of Justice investigation. Kobach successfully defended the smuggling law in federal court, and went on to train Arpaio’s officers in immigration enforcement strategies. He also helped write another controversial Arizona law that would fine employers if they fail to check the immigration status of potential hires. The law, which Kobach believes is “much more sweeping in scope and arguably has a greater potential impact on illegal immigration” than Arizona’s 2010 legislation, is awaiting review by the Supreme Court.

The Kansas attorney has also defended legislation in Pennsylvania and Texas that would revoke operating licenses for businesses who hired illegal immigrants and landlords who rented to them. He successfully sued the state of California to block a legislative provision that allowed illegal immigrants to pay in-state college tuition rates. And he’s preparing to open up yet another front in the immigration fight in San Francisco, representing a woman whose husband and sons were allegedly killed by an illegal immigrant—and who is suing the city for designating itself as a “sanctuary” that discourages immigration crackdowns.

Liberal immigration advocates say that Kobach has worked hard to develop laws that can withstand court challenges. “[The Arizona] law was very carefully crafted to track many provisions in federal law—it creates a plausible case for proponents to say we’re not doing anything new,” says Mary Giovagnoli, executive director of the Immigration Policy Center. “It’s a disingenuous argument, to say if it’s illegal in the federal law, it’s OK when it’s illegal in state law…but it’s very clever lawyering.”

For his part, Kobach says he’s simply learned from his regular adversaries, such as the ACLU and Mexican American Legal Defense and Education Fund. “They take the courts very seriously and recognize that the legal battles in the courtroom are every bit as important in political battles in Congress and in the state legislature,” he says.

The Arizona immigration law has opened up a split between leading Republicans who’ve supported the law and those who’ve vehemently denounced it, including Jeb Bush, Karl Rove, and Texas Gov. Rick Perry. Yet Kobach denies that the issue could divide the GOP. “I don’t think the Arizona will end up causing any kind of rift in the Republican Party,” says Kobach. “Many of those Republicans who criticized the law right at the outset—they obviously hadn’t had a chance to read it…I don’t expect they’ll continue to oppose it.”

On the phone, on radio, and on television, Kobach strikes a measured tone. He talks about immigration in legalistic language, eschewing fear-mongering rhetoric. But he’s attracted accolades from national conservatives who routinely inflame the right-wing base. “We need a Kris Kobach in every state in the country,” Michelle Malkin has declared. “No one in this country has done more to stop illegal immigration than Kris Kobach,” former Rep. Tom Tancredo has said. And Kobach is making use of the issue in the GOP primary for the Kansas secretary of state race: He’s charged that illegal immigrants are helping to fuel rampant voter fraud.

Kobach’s opponents have pointed to these endorsements as evidence that he’s an extremist on immigration. But so far, the criticisms haven’t dented his growing national profile. Though the immigration fight may ultimately wound the GOP, Kobach, for now, remains ascendant.