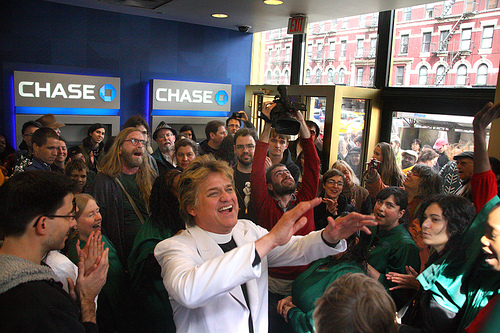 4/18/10 - Reverend Billy and the Mountaintop Gospel Choir protest JPMorgan's MTR policy at a branch bank in April. Flickr/<a href="http://www.flickr.com/photos/voterevbilly/4543064843/">Rev. Billy and the Church of Life After Shopping</a>

In late March, I wrote about how Wall Street powerhouse JPMorgan Chase continues to fund coal companies that engage in mountaintop removal mining (MTR), a dangerous, environmentally devastating type of strip mining in which the peaks of mountains are literally blown off, exposing the seams of coal that run underneath. Problem is, the rubble and waste from MTR mining usually ends up in nearby rivers and water sources, contaminating them, killing local wildife, and often violating federal laws like the Clean Water Act. As I reported, “over the past 17 years, JPMorgan Chase has helped to underwrite nearly 20 bond or loan deals, worth a combined $8.5 trillion, for some of the biggest players in the MTR mining business, according to data from Bloomberg.”

Today, Rainforest Action Network, a leading environmental group pressuring banks to end MTR financing, released a new report card, in conjunction with the Sierra Club and Banktrack, grading the world’s big banks on their MTR policies. JPMorgan, which has yet to cut its MTR ties (and repeatedly refused to tell Mother Jones why), received an “F”; so, too, did PNC, the world’s largest MTR financier, and UBS, which finances one-third of the Appalachian region’s MTR mining.

Credit Suisse ranked highest among the world’s biggest banks with an “A-,” a grade it received for its policy—first reported by Mother Jones—of refusing to finance any coal mined using MTR.

The report card’s authors say they showed the banks their grades before releasing the report, in an effort to get the banks to change their policies. In one case, Morgan Stanley issued a public statement on its MTR policy after learning of its failing grade from RAN and the Sierra Club; that grade was bumped up to a “C” after the public announcement.

The full report is available here.