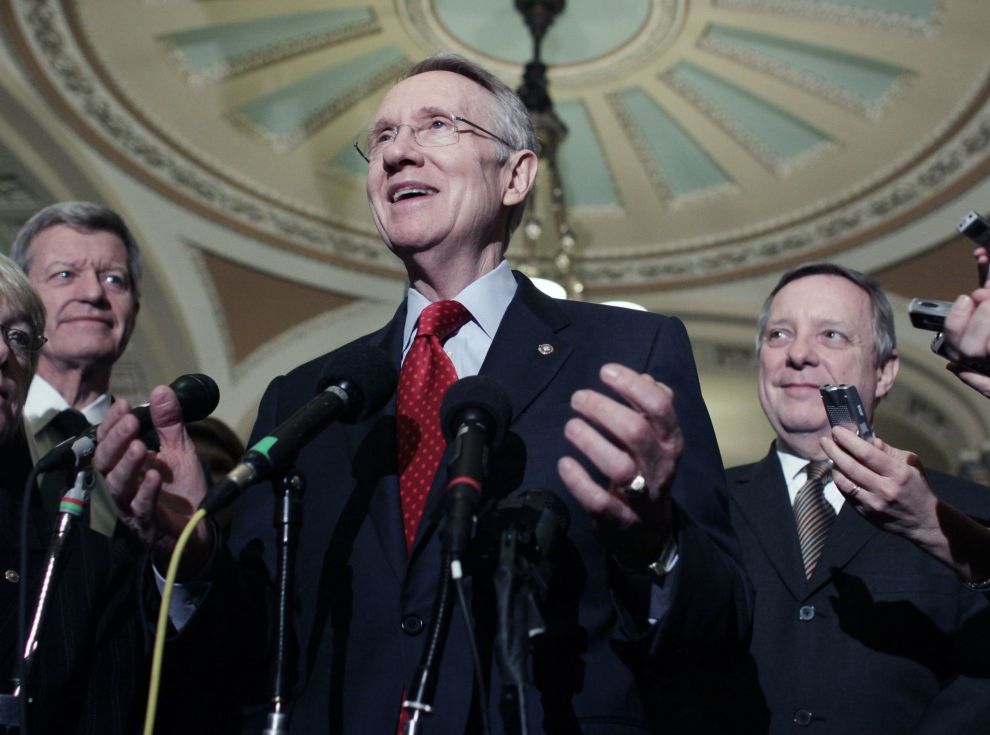 Last week’s passage in the Senate of a historic and comprehensive financial reform bill clinched a personal victory for Senate majority leader Harry Reid (D-Nev.). And Reid is a man in need of big wins. He’s facing double-digit deficits in midterm election polling and an anti-incumbent mood sweeping the country. Will financial reform give Reid the boost he needs to defeat his Republican opponent?

The Nevada senator‘s poll numbers in his 2010 reelection bid have been sagging for months. After expending massive amounts of political capital on a health care bill that’s deeply unpopular in his home state, Reid is trailing all of his Republican challengers. An April 27 Rasmussen poll put his leading opponent, former Nevada GOP chairwoman Sue Lowden, ahead by 13 percentage points, an advantage Lowden has more or less maintained since the beginning of the year. Reid trails two other Republicans, Danny Tarkanian and Sharron Angle, by between eight to 10 points in the polls as well. So bad was his standing in Nevada earlier this year that he had to reassure voters he was still running for reelection.

The Senate’s financial reform battle gave Reid an ideal opportunity to fight back from the brink. His top Democratic counterpart, Sen. Chris Dodd (D-Conn.), who’s retiring this year, did much of the party’s back-room dealing and absorbed most of the Democratic-directed criticism. That left Reid, a former amateur boxer, to bash his two favorite punching bags—Republicans and big banks.

Reid forced Republicans to drag their opposition to the bill into public every chance he got. He hasn’t often used the tactic of forcing Republicans to actually filibuster legislation, but, knowing that the Democrats’ image could only improve, he consistently did so during the financial reform debate. When the GOP repeatedly filibustered the reform bill, he deemed them “anti-American.” His office called out Republicans for visiting top hedge-fund managers in the middle of writing the finance bill. The barrage of rhetorical jabs culminated in early May when, steaming over Republicans’ filibustering tactics to block the start of the floor debate on financial reform, Reid said, “The Republicans are having difficulty determining how they’re going to continue making love to Wall Street.” (Reid spokesman Jim Manley rubbed salt in the wound, saying soon after, “What can I say? It’s true. Republicans are making love to Wall Street while Main Street is getting screwed.”)

Given his state’s abysmal economic condition, Reid couldn’t ask for a better bill to tout on the campaign trail, experts say. In Nevada, unemployment is 13.7 percent, second only to Michigan among all 50 states. In 2009, Nevada’s foreclosure rate—one foreclosure filing for every ten houses, or 112,000 filings overall—was the highest in the US, according to RealtyTrac. Railing against big banks and the politicians in the banks’ pockets is a no-lose strategy, says Eric Herzik, chair of the University of Nevada-Reno’s political science department. “This is one area where he can say as part of his campaign, ‘Harry Reid is standing up for Nevada and standing up against the big banks,'” Herzik says. “That’s not a bad line to have in Nevada.”

That message, Herzik says, will be especially important as Reid tries to win over Nevada’s centrist voters, the key bloc in his reelection bid. The way Herzik sees it, Reid has a loyal base of voters, and another bloc of voters—about 40 percent of the state—who’ll always vote against him. Winning this fall will mean winning over the remaining voters in the middle—a task made easier by passing the Senate’s Wall Street overhaul. “If he can hold his base and start wooing back those centrists, the people who’re driving his negatives, then he wins,” Herzik says. “Particularly on an item like financial reform, he’s in a very good position.”

Even though the midterm elections are just over five months away, Reid won’t have any problems reminding Nevadans that he fought Wall Street and won, says David Damore, a political science professor at the University of Nevada-Las Vegas. Damore points to Reid’s fundraising prowess—he has raised $16.8 million so far for the 2010 election, nearly eight times more than Lowden, his closest competitor, and more than every other candidate combined—and concludes that Reid won’t have any trouble advertising his role in passing the bill. “He’s going to have a lot of money to remind people about that,” Damore says.

A spokeswoman for Reid said the senator would indeed use the passage of financial reform to separate himself from Lowden and other Republican candidates. “This is an important distinction between Senator Reid and Republican senate candidates Sharron Angle, Danny Tarkanian, and Sue Lowden, who not only oppose Wall Street reform but advocate returning to the same economic policies of the Bush Administration that got us into this mess,” the spokeswoman, Regan Lachapelle, wrote in an email.

Ultimately, Herzik and Damore both predict success this fall for Reid, regardless of who he faces in the general election. Notable gaffes by Sue Lowden—she suggested offering chickens to physicians as payment for health care, and was recently accused of breaking campaign laws by accepting a donor’s luxury RV to travel the state—have boosted Reid’s prospects. And the rise of dark-horse GOP candidate—and Tea Party darling—Sharron Angle, who could steal votes from Lowden, benefits Reid as well, Herzik says. Combine these developments with Reid’s populist campaigning, reinvigorated by the finance bill’s passage, and the political climate looks a lot rosier for the majority leader than it did earlier this year. “Reid can say, ‘We’re fixing the excesses of Wall Street,’ which are a problem—and Reid’s on the right side of that,” Herzik says. “I don’t see how the Republicans can go after him on this.”