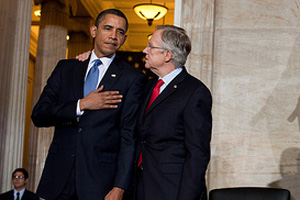 Harry Reid, the Democrats’ Senate Majority Leader, faces a tough reelection fight back in Nevada this fall. He’s in big trouble in the polls—TPM’s poll average has him trailing Sue Lowden, the likely GOP nominee, 52.6 percent to 38.3 percent. These are terrible numbers for an incumbent, and they mean Reid will probably lose. Nate Silver, the polling guru, gives the Republicans a nearly 80 percent chance of picking up the seat. All that said, it’s not over ’til it’s over. Reid has an immense war chest, and has threatened to spend as much as $25 million on the election. The Democrats will certainly pull out all the stops to save him. And now that health care reform has passed the House and the Senate and been signed into law, Reid has something big to run on. So (to borrow a Vegas-related phrase) he’s going all-in, running ads that tie him explicitly to health care reform. They’re actually pretty good:

Reid’s clearly counting on the passage of health care reform to help him get through his toughest reelection battle yet. He’s focusing on the aspects of reform that kick in right away—like the tax credits for small businesses that offer health insurance to their employees—and hoping people give him credit for making their lives a little bit easier. Expect to see a lot more messaging like this from Dems across the country as November draws near.