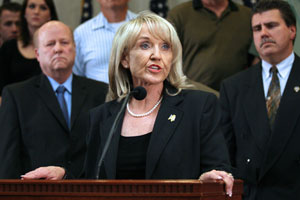 When Arizona governor Jan Brewer signed the most draconian immigration statute in the country last month, she said she was doing it because Washington had failed to act, blaming “decades of federal inaction and misguided policy” for creating “an unacceptable situation.” But conservative Grover Norquist, head of Americans for Tax Reform, insists she had a cynical motive: She was exploiting this hot-button issue. He says Brewer is a “lousy governor” who’s using a “clever strategy to get people to focus on something other than her billion-dollar tax increase.” With this comment, Norquist is setting off a major catfight between a leading strategist of the conservative movement and a governor hailed on the right for her tough stand on immigration.

Whether or not it was intentional, Brewer’s timing certainly seems perfect. As national pundits and the Obama administration rained criticism on her for signing a bill that empowers local law enforcement to detain people suspected of being in the country illegally, Brewer quietly scored a major victory that enraged anti-tax activists. On May 19, voters approved a one-cent hike in the state sales tax that is predicted to send a billion dollars into the state’s dwindling coffers. The driving force behind the initiative was Brewer herself, who realized that the state’s $1.6 billion deficit couldn’t be overcome simply by cutting services without serious repercussions to state residents.

Even with the tax hike, the state is about to drop more than 300,000 residents from Medicaid—about a quarter of the program’s total capacity. It has closed rest stops and parks and will be hiking tuition rates at its largest universities by 20 percent. More cuts would have seriously threatened primary and secondary education. So last year, shortly after Brewer moved up from the secretary of state’s office to fill in for Democrat Janet Napolitano—who left the governor’s mansion to run the US Department of Homeland Security—she realized that the state’s budget problems couldn’t be fixed just by a snip here and a trim there. She started pushing the tax hike, a move that put her at serious odds with the Republicans in her party and many Democrats, too. The tax proposal was a very modest one. But it was so unpopular among Republicans that when Brewer announced it, 20 people jumped in to the primary election to challenge her in August, when she makes her first official run for the governor’s seat.

The proposed tax hike might have been the death of Brewer’s campaign but for one thing: Her decision to sign the immigration bill. While roundly criticized in Washington and elsewhere, the immigration measure proved wildly popular at home. And it earned Brewer the support of such luminaries as Sarah Palin, who now appears prominently on a website funded by Brewer’s campaign, www.securetheborder.org.

Brewer has now become something of a heroine to some conservatives. They seem content to overlook the tax apostasy. But not Norquist, who not only hates the tax hike but the immigration bill, too.

Brewer’s support of that measure has put a major damper on Norquist’s latest enterprise: an attempt to recruit conservative Latinos into the GOP fold. In February, Norquist helped launch the Latino Partnership for Conservative Principles, a spin-off of the American Principles Project founded by conservative Princeton professor Robert George. George, a gay marriage foe, had apparently hoped to appeal to Latinos by relying on such social issues as abortion and gay marriage. (Latinos tend to be more conservative on these topics.) The group’s official mission is “to garner greater Latino support for conservative causes and candidates, and at the same time, to encourage the conservative movement to support Latino conservative groups, leaders, and candidates, as well as policies that are welcoming of Latino immigrants.”

The project was a recognition that despite major efforts by the sometimes-Spanish speaking George W. Bush, the GOP has a pretty dismal record at reaching the expanding Latino voting bloc that’s expected to have an increasing influence on future elections. Norquist officially kicked off the project at a big powwow in March at the Conservative Political Action Convention in Washington, where he appeared with a couple of telenovela stars and the new partnership’s executive director, Alfonso Aguilar, a former Bush administration Homeland Security official.

But Brewer and her fellow Arizona Republicans didn’t get the memo. The Arizona law isn’t exactly the sort of “welcoming” policy Norquist had in mind. It comes just as Aguilar has started hosting town hall meetings for Latinos (the first one was in Orlando earlier this month) and pitching the outreach as a “Tea Party for Hispanics.” He has also been appearing on TV trying to do damage control in the wake of Arizona’s immigration crackdown. Unfortunately for him and Norquist, recent polls suggest that the Arizona law has Latino voters fleeing from GOP candidates en masse, giving Democrats a significant advantage in several races in the West.

When I asked Norquist whether Brewer had basically sunk his latest project, he was somewhat diplomatic. He would only say that because of the immigration law, it’s important for conservatives to reach out to Latinos. He wasn’t so polite about Brewer, though. “Jan Brewer is on my bad person list already because of her tax increase,” he says. “She’s not getting into heaven for that reason. You don’t need two reasons not to get in.”