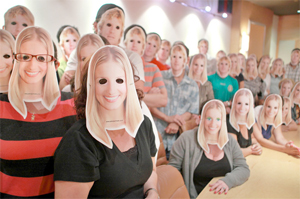 Courtesy of <a href="http://www.thisweekinladynews.com">This Week in Lady News</a>

Earlier in the week, MoJo introduced readers to the Gringo Mask, a tongue-in-cheek, free online downloadable mask designed to help minorities blend in with the white folks in Arizona—thus theoretically avoiding police harassment under SB 1070, as well as cultural racism under the well-settled rules of social hegemony. The his and hers masks were devised by Florida-based Zubi Advertising “to protect, support, and dignify our Hispanic community, with the firm idea of getting out and standing up to the SB1070 law.”

Hopefully you got a mask early, because if you waited ’til now, you’re out of luck. According to blogger Laura Martinez:

Apparently, yielding to criticisms by some gringos who didn’t like Zubi using the word gringo to describe gringos, the agency this week pulled it off the Web, replacing it with an explanation of what the mask intended—and didn’t intended to do.

Sure enough, local TV news published a statement from Zubi essentially saying it was sorry it ever tried to engage with American culture. And it’s not hard to find outraged, grammatically challenged white right-wing bloggers decrying the mask’s reverse racism—another term that, contrary to popular belief, didn’t die a natural death in the mid-’90s, as one might have suspected.

Folks, I’m from Florida, where old whites still claim the term “cracker” as an honorific. And I’m finding it hard to believe that whites, Caucasians, Anglo-Americans, or whatever you want to call this fairly artificial subclass of Homo sapiens (of which I’m apparently a member), could really be grousing about being called a silly name. A name that has cultural, national, and perhaps racial connotations—but that’s not the same as being a racist term. Is it?

But hell, what do I know? I’m a dumb pinko socialist fascist Nazi unpatriotic racist cracker honky. Which makes me about as worthless as a Kenyan Muslim anchor baby.