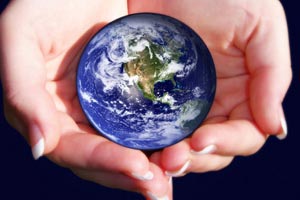 …the watery gel everyone from Dick Cheney to Barack Obama uses to keep their hands “99.9%” germ-free now is now available in a biodegradable formula made from 100 percent renewable plant-based ethanol in a completely recyclable PET plastic container. Whew!

The whole package has been certified by Ecologo, which confirms that the product meets its recently released “Instant Hand Antiseptic Products standard.” Accord to Joe Kanfer, CEO of GOJO, maker of Purell, it is the world’s first hand sanitizer to received certification from an independent eco-labeling program.

Purell certainly deserves props for producing a biodegradable product and greening its packaging. But as Mother Jones reported in “Germ Warfare,” our national obsession with cleanliness has reached a fever pitch, and some scientists think being too clean has actually made us sicker. Proponents of the “hygiene hypothesis” blame allergies and other autoimmune diseases on a lack of certain germs: In the developing world, where gut parasites are much more common, autoimmune disorders are much less common.

As the Boston Globe reports, some doctors are even experimenting with infecting allergic people with hook worms in hopes of giving their immune systems something to do besides give them allergy attacks. Infecting yourself with a parasite might seem creepier than popping a Benadryl, but the process actually sounds fairly painless. If it works? Imagine the possibilities: Less sneezing=fewer allergy drugs=fewer antihistamines in our waterways, etc.

As Triple Pundit’s BC Upham points out, Purell isn’t to blame for antibiotic-resistant superbugs—it’s not made with antimicrobial agents, just alcohol. But it’s still an awfully effective germ killer. So what do you think, Blue Marble readers? Should Purell be allowed to call a hand sanitizer green?