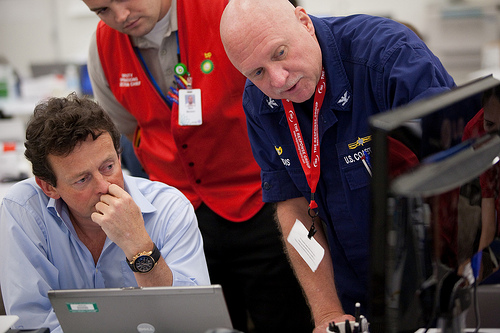 BP was going to try a so-called “top kill” of the gusher in the Gulf over the weekend—an attempt to plug the well that involved shooting heavy drilling liquids into the hole and then sealing it with cement. But now it looks like that won’t happen until Wednesday. Tensions between the oil company and the government have been rising, and questions about why it’s taking BP so long to stop the hemorrhaging well seemed to hit a new peak this weekend, with Interior Secretary Ken Salazar complaining at a news conference Sunday that the oil giant has missed “deadline after deadline.”

“If we find they’re not doing what they’re supposed to be doing, we’ll push them out of the way appropriately,” Salazar said.

But here’s the issue. The federal government really, really doesn’t want to push BP out of the way, because it doesn’t have a better solution, either. The company’s large containment dome idea failed, and it abandoned plans to try a smaller dome. Now they’re trying this top kill, but no one knows if that will work. BP acknowledges that there are “uncertainties” with this plan. If it fails, it will probably take until August to drill a relief well, the next option.

Here’s what Coast Guard spokesman Jim Hoeft told me in an email about control of the spill site:

At this moment in time, BP has the technology and the equipment to respond to this situation at the scene. As you’re aware, the leak is nearly a mile under water, so use of their equipment is vital in ensuring that the leak is stopped. The most important step that everyone is working towards is stopping the leak.

It’s one thing to acknowledge that BP has the technology to handle this (as regrettable as that might be). But over the weekend U.S. Coast Guard Commandant Adm. Thad Allen maintained that they’ve still got full faith in BP’s ability to fix this on CNN:

“When I give them direction or the federal on-scene coordinator gives them direction, we get a response. I’ve got [BP Chief Executive] Tony Hayward’s personal cell phone number. If I have a problem, I call him. Some of the problems we have had that we’ve worked through are more logistics and coordination issues. … I trust Tony Hayward. When I talk to him, I get an answer.

This is probably not the message the federal government should be sending at this point.