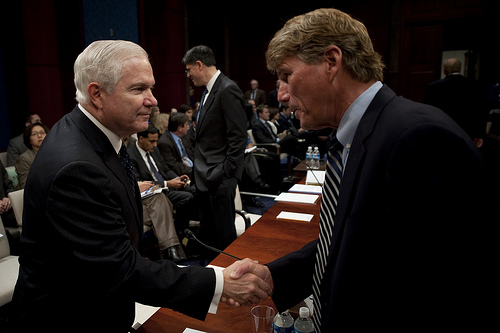 If you haven’t heard of Mississippi congressman Gene Taylor (and odds are you haven’t), then here’s a doozy of a first impression: In an interview with a Biloxi television station, Taylor compared the massive oil spill in the Gulf of Mexico to a mere case of spilt chocolate milk. According to a transcript of the interview posted by ThinkProgress, Taylor downplayed the seriousness of the BP spill—which is releasing 210,000 gallons of crude oil daily into the gulf, according to the National Oceanic and Atmospheric Administration—saying, “This isn’t Katrina. This is not Armageddon.” Taylor goes on to say:

I did this for the Coast Guard many years ago. Yeah, it’s bad. And it’s terrible that there’s a spill out there. But I would remind people that the oil is twenty miles from any marsh…That chocolate milk looking spill starts breaking up in smaller pieces…It is tending to break up naturally.

Naturally, ThinkProgress points out, Taylor is a supporter of offshore oil drilling and voted against the House’s comprehensive energy bill last year. He also counts the energy and natural resources industries among his top donors, according to the Center for Responsive Politics. While the extent of the spill is still elusive to government officials, who’ve had little success getting the leaking oil under control, a chocolate milk spill is hardly how they or the Gulf coast residents, soon to have their wetlands and beaches coated in oil, would characterize what the president himself has described as a national emergency.