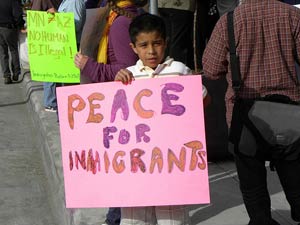 It’s not quite on par with the Iranian soccer team‘s protest of disputed 2009 election results, but this (via Kevin Drum) is pretty darn cool: The NBA’s Phoenix Suns are staging an on-court protest for tonight’s home playoff game to show their displeasure with their state’s insane new immigration law. As The Nation‘s Dave Zirin reports, the Suns will alter their jerseys to become “Los Suns” for their televised second-round matchup with the San Antonio Spurs:

In a statement released by the team, Sarver said, “The frustration with the federal government’s failure to deal with the issue of illegal immigration resulted in passage of a flawed state law. However intended, the result of passing this law is that our basic principles of equal rights and protection under the law are being called into question, and Arizona’s already struggling economy will suffer even further setbacks at a time when the state can ill-afford them.”

Or maybe they were just tired of being bombarded with signs like this. The Sun aren’t acting alone, either. Spurs coach Greg Popovich said his players support their opponents’ efforts—in fact, they would have played as “Los Spurs” but weren’t able to get the custom jerseys made in time. President Obama, who has soundly denounced Arizona’s new immigration law, gave a shout-out to the team’s protest in his Cinco de Mayo address, telling his audience, “I know that a lot of you would rather be watching tonight’s game—the Spurs against ‘Los Suns’ from Phoenix.” Meanwhile, the Major League Baseball Players Association has already denounced the law, and and there’s an ongoing campaign to prevent the Diamondbacks from hosting the All-Star game as scheduled in 2011.

But not everyone in sports is unified in opposition. Los Angeles Lakers coach Phil Jackson told ESPN.com, “Am I crazy, or am I the only one that heard [the legislature] say ‘we just took the United States immigration law and adapted it to our state”:

I don’t think teams should get involved in the political stuff. And I think this one’s still kind of coming out to balance as to how it’s going to be favorably looked upon by our public. If I heard it right the American people are really for stronger immigration laws, if I’m not mistaken. Where we stand as basketball teams, we should let that kind of play out and let the political end of that go where it’s going to go.