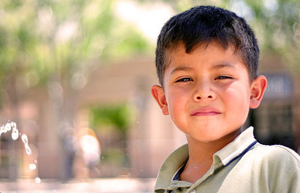 Arizona’s anti-immigration crackdown is only getting started—and students are increasingly in the state’s sights. Having passed one of the nation’s harshest laws against illegal immigration and a separate law targeting ethnic studies, state legislators could soon take up a new bill that would zero in on illegal immigrant children within the public schools. The Daily Beast’s Dana Goldstein reports:

A new bill would require them to record and report to the state the number of illegal immigrant children in their student population, along with an estimation of the costs associated with educating those children.

If passed, SB 1097 would compel teachers and administrators to determine the legal status of students and their families, almost certainly discouraging enrollment and parental participation at school.

The students bill was passed by the Arizona state Senate on March 31 and is now pending before the House. Sponsoring the legislation is none other than GOP state senator Russell Pearce, the primary sponsor of the recent immigration bill. As Goldstein notes, Pearce had previously tried to push for legislation that aimed to deny citizenship status to children born to illegal immigrant parents. He also wrote a ballot 2006 initiative that “denied students the right to in-state college tuition or scholarships if they had been brought to the country illegally as children.”

The Arizona students bill mirrors legislation currently before the Oklahoma state legislature that would require all public schools to verify the immigration status of their students. Both bills could face a constitutional challenge: in 1982, the Supreme Court ruled in Plyler vs. Doe that illegal immigrant students could not be barred from schools under the Equal Protection Clause of the 14th Amendment. The Court ruled that the law discriminated against children who had no control over their legal status, adding, moreover, that eliminating them from schools would result in “the creation and perpetuation of a subclass of illiterates within our boundaries.”

In Oklahoma, both Hispanic leaders and public school officials have warned that the proposal would deter immigrant children from attending school and force the school administrators to act as federal immigration agents. While proponents of the legislation argue that their only purpose is to obtain “accurate information” about the cost of educating illegal immigrants, such legislation appears to be a stepping stone toward pushing them out of the school system altogether. And the Immigration Reform Law Institute, the legal arm of the anti-immigration movement, makes their ulterior motives clear: the group praises both Arizona and Oklahoma bills for pushing back against “de facto student amnesty.”