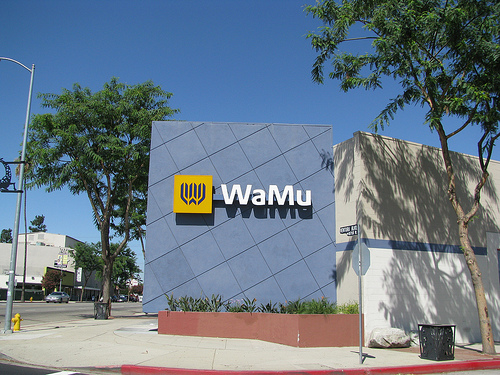 After a year-and-a-half long financial autopsy, the Senate investigations subcommittee today is exploring the demise of the Washington Mutual, once among the US’ largest thrift banks with more than $330 billion in assets and the largest bank failure in American history. The hearing will include testimony from former WaMu executives like CEO Kerry Killinger, president Stephen Rotella, past risk officers, and the former president of the Home Loans division at the heart of WaMu’s stunning meltdown.

The beginning of the end, as the Senate’s investigation suggests, came in 1999, when WaMu snapped up a subprime lender named Long Beach Mortgage Company. Long Beach was a major player in the booming securitization business—the origination of loans to be bundled into bonds backed by those pools of loans. These mortgage-backed securities were then sold to Wall Street banks and the two government-sponsored housing corporations, Fannie Mae and Freddie Mac. In 2006, Long Beach injected a staggering $30 billion in subprime loans into the securitization machine, a sixfold increase from only three years before. And by churning out subprime loans to less qualified homeowners, Long Beach fit perfectly into WaMu CEO Killinger’s goal, echoing that of executives like Citigroup’s Sandy Weill, of making WaMu into a supermarket bank, a one-stop shop for customers of all stripes.

Another key date, as the Senate investigation shows, was 2005, when WaMu and Long Beach, as shown in an internal WaMu PowerPoint presentation, settled on a strategy called “gain on sale.” That strategy essentially stressed how much more profit could be made on riskier loans as opposed to government-backed, fixed interest-rate loans, and that these riskier, more profitable products—home equity, subprime, and option adjustable-rate mortgages—could be a cash cow for WaMu.

This cutthroat, purely profit-driven philosophy meant WaMu and Long Beach increasingly pushed their employees, in the early 2000s, to focus more on volume than quality—selling more and more loans with little regard for the underwriting or potential success of those loans. “WaMu built its conveyor belt of toxic mortgages to feed Wall Street’s appetite for mortgage backed securities,” Levin said. “To keep the conveyor belt running and feed the securitization machine on Wall Street, Washington Mutual engaged in lending practices that created a mortgage time bomb.”

The scope of that fraud is staggering. As an April 2008 memo from a WaMu internal fraud investigator says, a sales employee “admitted that during that crunch time some of the Associates would ‘manufacture’ asset statements from previous loan docs,” and that the pressure to churn out more loans was “tremendous.” Salespeople were told to do “whatever it took” to pump out more loans to feed WaMu’s securitization frenzy. “In WaMu’s loan business, volume was king,” Sen. Carl Levin (D-MI), chair of the investigations subcommittee, said.

The full-steam-ahead mentality to subprime lending, both in WaMu’s prime lending operation and Long Beach’s subprime machine, inevitably led to shoddier and grossly fraudulent practices within WaMu. So bad was the fraud that when another internal WaMu review analyzed the loans sold by two top offices, both in southern California, the audit found 58 percent and 83 percent of the loans, respectively, sold by the two offices were marred with fraud. Yet, as Levin pointed out, “virtually none” of the recommendations to rein in such fraud included in that review were ever implemented.

Moreover, WaMu’s bank regulator, the Office of Thrift Supervision, said Long Beach loans “have horrible performance”; between 1997 and 2003, Long Beach recorded among the highest net credit losses in the nation, according to the OTS. In the fall of 2006, WaMu’s capital markets chief, David Beck, told the head of the Home Loans divisions that “LBMC paper is among the worst performing in the [market].” “Audit after audit detailed problems,” Levin said. In 2005 and 2006, Long Beach was forced to repurchase more than $875 million in loans, lost $107 million on defaults for the few loans still on its books, while also spending $75 million to compensate for a shortfall in repurchasing reserve, Levin said. In 2007, WaMu shut down the troubled Long Beach and made it a direct subsidiary of WaMu.

The damage, though, had already been done, and both Long Beach and WaMu’s prime and subprime assembly line and shoddy lending practices sowed the seeds of the $300-billion bank’s demise. Not only did the losses incurred by Long Beach damage the bank, but the collapse of the securitization machine meant WaMu’s housing profits all but dried up. At the same time, WaMu’s stock plummeted 88 percent throughout 2008, leading federal regulators in September 2008 to seize the bank and arrange a shotgun marriage with JPMorgan Chase. (That tailspin didn’t stop Killinger from making, between 2003 and 2007, anywhere from $11 million to $20 million each year.) “Because volume and speed were king, loan quality fell by the wayside, and WaMu churned out more and more loans that were high risk and poor quality,” Levin said. “Washington Mutual was taken in by the short-term profits that ever poor quality mortgages generated on Wall Street.”

That’s a very brief overview of the Senate investigation subcommittee’s findings, but there’s far, far more to their hearing on WaMu, which is going on throughout the day. Check back for more updates on WaMu, including testimonies from the president and CEO of WaMu during its subprime heyday.