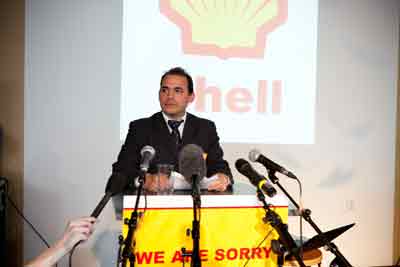 On May 27, shellapologises.com popped up on the Web, blazing a message: “Shell Apologises to Niger Delta for Human Rights Abuses.” The press release contained therein reads:

More than 60 per cent of the people in the Niger Delta depend on the natural environment for their livelihood. But due to the oil pollution, many of them use polluted water to drink and to cook and wash with, and eat fish contaminated with oil and other toxins. Oil spills and waste dumping have also seriously damaged agricultural land.

The destruction of livelihoods and the lack of redress have led people to steal oil and vandalise oil infrastructure in an attempt to gain compensation or clean-up contracts. Armed groups engage in large-scale theft of oil and the ransoming of oil workers. Government reprisals frequently involve excessive force and the collective punishment of communities, thus deepening general anger and resentment.

All of that is true; unfortunately, this part is not:

Shell apologises to all inhabitants of Nigeria’s Niger Delta for the many years of human rights violations, for which Shell takes full responsibility.

Finally, an age of corporate self-accountability, I thought. But like other writers at Mother Jones faced with similar press releases, I got punk’d. The Shell apology is part of an elaborate prank perpetrated by those infamous corporate imposters, the Yes Men.

“We approached Shell in this case because we were asked to do a workshop in the Hague as part of a human rights film festival,”  the Yes Men’s Mike Bonnano told MoJo in an email. “The target was Shell, since their HQ is right there in the Hague, and they have a bad human rights record, particularly in the Niger Delta, where they are currently refusing to maintain the environmental standards that apply elsewhere in the world for similar extraction operations.

“It also happens that Shell has just taken a huge step backwards by cutting their solar energy program and other green initiatives; their new CEO [Peter Voser] comes from finance and is taking the company in the direction of short-term profits at the expense of the long-term welfare of the planet. But then again, they are an oil company, so what do we expect?”

One expectation might be to see more corporate policies operating under the premise that helping people is profitable. The Yes Men’s satirical theatre, which criticizes complacent corporations and complicit citizens without coming off as preachy, provides (as MoJo senior editor Dave Gilson wrote) much-needed “sudden jolts of awareness or catharsis.” The group’s actions basically translate into “We know all about you” indictments by expressing what companies like Shell should, but don’t, do—as the group’s faux press conference shows:

“After we did the announcements we went out on the streets with street teams dressed in shell uniforms apologizing to the people of the Hague on behalf of Shell,” Bonnano wrote. “The event did in fact bait Shell…and it would be a bonus if they counter attack. But success does not require a response, it is just enhanced by it. If they fail to attack us, after all, we can always assume their identity and attack us for them, as we did with Dow Chemical in the past.”

Stand by for Shell’s response.