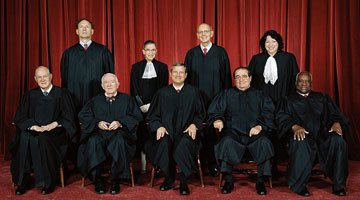 This week, the Congressional Black Caucus kicked off its campaign to move a woman or person of color into Justice John Paul Stevens’s Supreme Court seat once he retires. On the nine-member Supreme Court, there are: two women (22%) in a nation where women are 50.7% of the general population, one black justice (11%) in a country where African-Americans are 12.8% of the population, and one Latina (11%) even though Latinos are the fastest growing minority population (currently 15.4%). The high court’s gender disparity is the most glaring, and Caucus chairwoman Barbara Lee (D-Calif.) urged Obama to consider these inequalities when making his high court nominations.

Recently, a report (PDF) by the Congressional Hispanic Staffers Association (CHSA) found that Congress’s diversity stats aren’t that great either. From The Hill:

Of the 199 offices that responded to the study conducted by the House’s chief administrative officer (CAO), 7.5 percent of chiefs of staff were black, 2.7 percent were Hispanic, 1.6 percent were Asian and 1.1 percent were American Indian. There were no Pacific Islanders. Those numbers lag far behind the racial makeup of the United States population, which the Census Bureau estimated to consist of about 35 percent minorities. Those numbers, which came after the 2000 census, specifically break down to 12.5 percent Latino, 12.3 percent African-American, 5.5 percent some other race, 3.6 percent Asian and 1 percent American Indian.

This news spurred Speaker Nancy Pelosi (D-Calif.) and Minority Leader John Boehner (R-Ohio) to launch a new House-wide initiative that increases the hiring and retention of diverse candidates. The initiative includes a “résumé bank” that targets the employment and promotion of congressional staff candidates who are not white as well as a diversity-oriented awareness program. CHSA also wants qualified, interested minority candidates to be among those interviewed when top-level job vacancies are available, a policy which hasn’t been implemented yet.

Can a relatively homogeneous governing body render decisions that reflect the heterogeneous backgrounds, experiences, and viewpoints of the US population? Stephanie’s Citizen’s United article basically spells out the answer to that one. Will a visibly diverse SCOTUS and Congress represent the socio-economic needs of minorities? Maybe not (See: Clarence Thomas or Condoleezza Rice). But it’s worth a try.