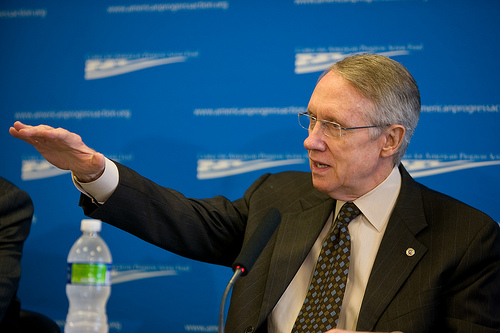 Photo by the Center for American Progress Action Fund, <a href="http://www.flickr.com/photos/americanprogressaction/3407276352/">via Flickr</a>.

First, Lindsey Graham signaled that he is pissed that Democrats might move to immigration legislation before taking up the climate and energy package he’s working on. Pissed enough to walk away if Majority Leader Harry Reid didn’t commit to moving climate first. Then last night he told reporters that he doesn’t want immigration coming up this year at all—no way, no how.

Today Reid signaled that climate will move first. “The energy bill is much further down the road … Common sense dictates that if you have a bill that’s ready to go, that’s the one I’m going to go to,” Reid told reporters today (via TPMDC). “The energy bill is ready and we’ll move that more quickly than the bill we don’t have. I don’t have an immigration bill.”

Will that satisfy Graham? Not clear. As I reported last night, he seemed to move the goal posts on the issue, arguing that immigration won’t be ready at all this year and he wants confirmation that it won’t be pushed. But Graham co-wrote an op-ed last month calling for bipartisan work on immigration reform. He also called on President Obama “to step it up” on immigration. So it’s hard to say where he is right now and whether he’ll come back to the table on climate and energy.