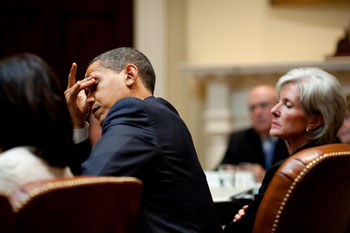 The neocons have a new beef with President Barack Obama: he’s reportedly dropping the phrase “Islamist extremism” and replacing it with “violent extremism.” On Thursday, the Committee on the Present Danger—which in its heyday was a collection of Cold War hawks who opposed détente with the Soviet Union—sent a letter to Obama, deputy national security adviser John Brennan, and Secretary of State Hillary Clinton declaring that “this action contradicts the accepted military intelligence doctrine to properly identify, define, and know your enemy.”

the CPD believes that militant Islamic regimes and movements represent a serious threat to the United States and other free nations. If we are to meet this challenge, we must understand the beliefs and motivations of those who have dedicated themselves to what they call a “jihad” against “infidels” based on their reading of the Koran.

The CPD letter echoes an angry note that Sen. Joe Lieberman (I-Conn.), an honorary CPD chairman, sent Brennan earlier in the month. Lieberman complained that the term “Islamist extremism” does not

appear in two critical national security documents released by the Administration in 2010: the Department of Homeland Security’s Quadrennial Homeland Security Review Report and the Department of Defense’s Quadrennial Defense Review Report—both of which guide our government’s numerous and costly policies and programs that have as their major purpose protecting the American people from terrorism inspired by violent Islamist extremist ideology and carries out by violent Islamist terrorists.

The White House has generally not been eager to discuss such rhetorical shifts from the hard-edged language of the Bush-Cheney days. The goal is obviously to step away from sharp words that administration officials believe can get in the way of developing the international alliances necessary to combat al Qaeda and other extremists. At an April 7 briefing, State Department spokesperson P.J. Crowley was asked about the removal of the phrase “Islamic radicalism” from a national security document. He responded:

We do confront a global movement of terrorists, violent extremists. Not all of the—not all of them are Islamic. I think it would be a mistake to say that this is about one part of the world or one community. We oppose people who employ violence for political purposes regardless of where they are. And al-Qaida is working hard to extend its network to all corners of the world, including here in the United States. So I think terminology is important, but part of our strategy going forward is to combat violent extremism in all of its forms. And that will involve working closely with Muslim communities around the world.

This was not a full explanation of the rhetorical switch. But it was consistent with how the administration has responded to such questions. At White House press secretary Robert Gibbs’ first briefing, on January 22, 2009, I noted that Obama had not used the phrase “war on terror” in his first days in office and asked if that was deliberate. Gibbs said that Obama was using language consistent with his inaugural address, which had not included the term “war on terror.”

Additionally, the Obama administration has backed away from using the phrase “rogue nation” to describe North Korea and Iran, instead describing these nations as “outliers.” This is another change that ticks off the hawks.

We’re trying to be very careful and precise in our use of language because I think the language we use and the images we project really do have resonance. That’s why I don’t use the term jihadist to refer to terrorists. It gives them religious legitimacy that they so desperately seek, but I ain’t going to give it to them.

But that doesn’t fly with the right-wing critics of the administration. Even though Obama has expanded the war in Afghanistan and stepped up the use of drones to attack al Qaeda and Taliban operatives in Afghanistan and Pakistan, his conservative foes are constantly looking for ways to depict him as weak on national security. The CPD letter demands that Obama “accurately identify the threat we face.” Otherwise, it implies, the neocons and their allies will launch a war over words.