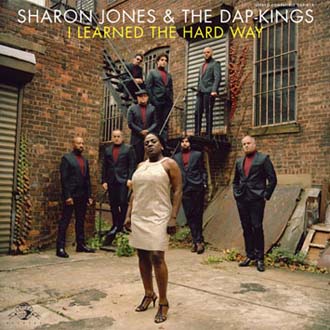 True to form, Sharon Jones and the Dap-Kings’ fourth album sounds like it came straight out of the 1960s soul-pop explosion. They do it without reaching for something they’re not; the music feels both fresh and retro. I Learned The Hard Way isn’t as satisfying as 2007’s 100 Days 100 Nights, but it’s recorded analog, and it’s still some of the best Neo-Soul yet.

Hailing from Brooklyn, the Dap-Kings include bass, tenor sax, guitars, congas, drums, and trumpet, while Jones belts and strides through R&B and Motown-inspired ballads about lost love and men who renege on their promises. Try “Better Things” for a groovy funk rendition, and “If You Call” for a sultry appeal for love. Doctor, doctor, come cut my heart out because it hardly beats at all, she croons. But please, please, leave a little potion just in case my baby calls. “Money” starts slow and breaks into an upbeat hunt, showcasing her powerful voice: Money! Where have you gone to? Jones sings, as if addressing an absent lover who’s about to get the boot. Money! We scrimp, we save to keep you around, but when we need it, you’re nowhere to be found!

And don’t miss the last track, “Mama Don’t Like My Man.” Understated and relatively quiet, it’s one of my favorites, with slow hand clapping, a simple progression, and great harmonies.

After more than a dozen years singing backup on other people’s records, Jones released Dap-Dippin’ With… in 1998, and two more albums since. Now, at 54, she’s a force to be reckoned with. In 2007, she toured separately with Lou Reed and contemporary R&B muse Amy Winehouse. “There’s nothing retro about me, baby,” she told New York Magazine. “I am soul!”

Most of these tracks are about timeless subjects like relationships, hope, and despair—which makes funk and Motown renditions plausible—but when Jones croons about Wall Street and fickle gas prices at the beginning of “Money,” things get momentarily awkward. Then again, maybe she’s talking about oil embargo of 1973, a year the Temptations, Stevie Wonder, Diana Ross, and James Brown each put out albums. The Dap-Kings could fool me.