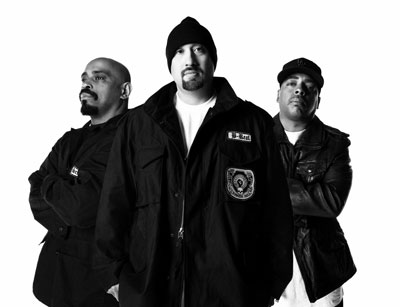 At Cypress Hill’s annual 4/20 show the hip-hop aficionados basically hot-boxed the entire Warfield Theater in San Francisco. In the middle of the four-piece crew’s three-hour set, their mascot—a human joint!—wandered center stage coughing and looking like a blazed mess. At that point, the rap group’s head honcho B-Real proceeded to fire up a 14-inch dick-like blunt, an image which pretty much sums up most stoners attraction to this lionized venue on this most holy night. Yes! It’s the weed! And an uninhibited celebration of it through open indulgence in it. Every super-relaxed bro in that maxed-out crowd (especially the dude in front of me wearing the “Got Weed?” shirt) was lighting up either a middle-finger-sized joint, a pipe, a one-hitter, or just feeling loopy from the unavoidable mega-contact high.

It was so dope. I almost forgot who was on stage.

The appeal of Cypress Hill—the SoCal-based gangsters-turned-rappers act stars B-Real (who’s an ordained Santeria priest), Sen Dog, Eric Bobo, and DJ Muggs stand-in DJ Julio G—lies more in their brazen ganja-toking displays than in their music, which is a rock-and-rap-and-sometimes Latin-flavored bro-down. B-Real’s nasally rhymes—layered with turntable scratches, laptop samples, and Latin drums—get trumped by the “let’s get high all the time” mantra that underlies most of their jams, which is appropriate for a 4/20-themed show.

The fans I talked to at intermission confessed to either loving the group since its ’90s heyday or just remembering their awkward junior-high affection for Insane In The Brain. The group played this mainstream hit plus some tracks from their new album Rise Up! which also dropped on 4/20. They ended with Rock Superstar and roused an impromptu mosh pit on the ground floor. Sen Dog stage-dived a few times to the dismay of his security detail, which pummeled through the crowd continuously to rescue the rambunctious onetime member of the Bloods. All in all, it was a fun show, as you can see from the video below.

As for Cypress Hill’s stance on the prospect of the Golden State legalizing an herb enjoyed by many, the Huffington Post did a cool interview with Sen Dog and B-Real in which the duo explain the drug’s medicinal and economic benefits. That, to me, was even more dope than their show.