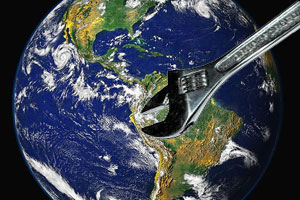 Are our worst-case scenario predictions about global warming overly optimistic? A new report published in the journal Oceanography argues that world leaders have underestimated the catastrophic consequences of climate change, and we may soon have to turn to dramatic options for reversing the warming trend.

In “A Very Inconvenient Truth,” lead author Charles H. Greene, a professor of Earth and atmospheric science at Cornell University, argues that the United Nation’s Intergovernmental Panel on Climate Change’s fourth assessment report, released in 2007, is too rosy.

Even if all man-made greenhouse gas emissions were stopped tomorrow and levels stabilized at today’s concentration, says Greene, global temperatures would still increase 4.3 degrees Fahrenheit by the end of this century, which is “significantly above the level which scientists and policy makers agree is a threshold for dangerous climate change.”

“Of course, greenhouse gas emissions will not stop tomorrow, so the actual temperature increase will likely be significantly larger, resulting in potentially catastrophic impacts to society unless other steps are taken to reduce the Earth’s temperature,” he says.

Greene’s proposed solution to this epic problem is geoengineering–a highly controversial subject. See the Mother Jones piece “Climate Hacking 101″ and dispatches from a recent conference on the topic for more. But as predictions about the planet’s fate grow more dire, we can expect more modest proposals to radically alter the earth’s atmosphere like this. The authors are probably spot on, however, in their conclusions about why we should even be thinking about this in the first place: “investing in geoengineering research now will enable policymakers to make informed decisions based on science rather than uninformed decisions made out of desperation.”