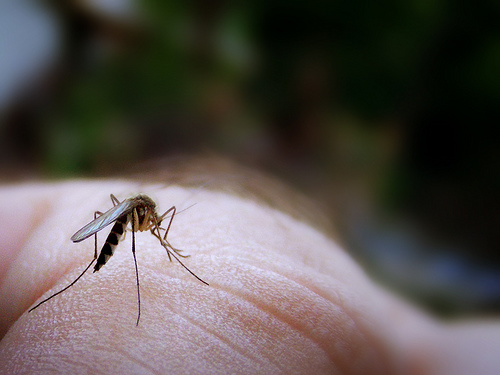 Sunday is World Malaria Day, and I got you two presents.

One is a crazy tidbit about malaria that you can use to impress anyone you’re having coffee or cocktails with this World Malaria Day weekend. Here it is:

In the 1930s, malaria infected 5 million people annually in the US. (The marshy South was a big source of the scourge, until dam-building dried it up and economic progress brought better housing.) In the interest of wiping the disease out the world over, the US spearheaded a campaign in the ’50s, endorsed by the World Health Organization, to wrap the planet in a big wet blanket of DDT. One of the countries that signed up was Nepal, which had a malaria problem so serious in the west that the only people who could live there were an ethnic minority called the Tharu that had developed a genetic tolerance to the disease. But with the gift of DDT, western Nepal suddenly became habitable to all Nepalese, who promptly moved in, displaced the Tharu, and forced them into permanent bonded servitude, which remained the status quo until the Nepalese government eventually outlawed the exploitation—in 2000. And that’s how a mosquito in the United States flapped its wings and a minority group in Nepal got disenfranchised and remained enslaved right up to the 21st century.

Your other present is a link to a page that tells you, in the event that you’re wondering, what you can do to help fight malaria, from making donations to organizing dance-offs (yep, really). Annual global funding for malaria eradication is $2 billion, but getting the disease under control, says the United Nations, will take three times that.