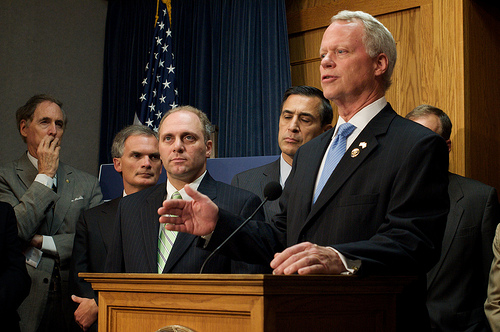 At a Second Amendment rally in the shadow of the Washington Monument, Rep. Paul Broun (R-Ga.) fired up an already boisterous crowd of gun lovers, sign toters, and self-proclaimed Constitutional defenders by railing against his “socialist” colleagues on Capitol Hill and demanding a ballot-box revolution this fall. In doing so, Broun gave the event’s organizers—like Skip Coryell, a anti-government gun rights advocate from Michigan—and attending groups like the Oath Keepers just what they wanted to hear.

Echoing a controversial remark made last fall aimed at House Speaker Nancy Pelosi, Broun told the crowd, “We have a lot of domestic enemies in the United States, and they work down the Mall,” referring to certain members of Congress. Soon after, Broun added that Second Amendment defenders like himself and those in the crowd—many of them sporting bright orange stickers saying “Guns Save Lives”—needed to protect themselves from “the tyrannical government of the United States” and fight back against the “socialists that are running Congress.”

This is not unusual rhetoric for Broun. He has called President Barack Obama a “socialist” and suggested that the administration might use a natural disaster or pandemic to “develop an environment where they can take over.” He has also refused to fill in the complete Census form this year, describing it as an invasion of his privacy.

In a brief interview after his speech, I asked Broun whether he, as a politician, agreed with the virulently anti-government rhetoric of the groups hosting the event. For instance, Larry Pratt of Gun Owners for America, one of the march’s sponsors, was reported to have said earlier today  that “we are in a war.” Referring to the government, he added, “They’re coming for our freedom, for our money, for our kids, for our property. They’re coming for everything because they’re a bunch of socialists!” Broun said that he believed “government certainly has a place,” but that only “people who are going to fight for limited government, low taxes, low intrusion into people’s lives” should be left in office. “It’s all about freedom,” he said. “The federal government should only be doing the 18 things that Article 1, Section 8 [of the Constitution] gives the authority to do. Just 18.”