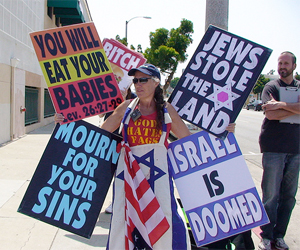 If you know Mother Jones, you know the Reverend Fred “God Hates Fags” Phelps. In just the past week, we’ve carried two stories touching on the Kansas hatemonger and the extended family that comprise his Westboro Baptist Church—a “crew of sign-carrying flat-earthers, whose shtick involves loudly thanking God for smiting gay-loving, libertine America and its sworn defenders.” They crisscross the nation, spreading their “God is hate” gospel at the funerals of soldiers killed in Iraq and Afghanistan; at grade schools; and anywhere else they can score a permit and a TV crew.

Never let it be said that Phelps doesn’t practice what he preaches. He’s had 13 children, and a few of them—the ones who rubbed a few extraneous brain cells together and found Daddy’s command of theology wanting—have found themselves on the outs with the family. After copious beatings, that is.

One of those children, Nate Phelps, quietly slipped into the ether, working as a cabbie in Cranbrook, British Columbia. But a chance encounter with a journalism student in his taxi led to a riveting news article…which led to a speaking engagement at an American Atheists convention…which led to this. Last week, Phelps sat down for an extended TV interview with reporter Peter Klein of The Standard, Canada’s 60 Minutes. This is no prodigal son; he ain’t ever going back. But the story of where he’s been and what he’s seen is absolutely amazing, from the stories of abuse to his father’s drug dependency. Watch the full video and read selected quotes after the jump.

On how Fred Phelps hates everyone:
“I think ultimately it’s that he hates everybody. I think, ultimately, it comes back to what’s happening going on inside of him, and that it manifests itself in all these ways that we see in the signs and their activities.”

On Fred Phelps beating his wife and kids:
PHELPS: “Part of his belief system was that he was to administer corporal punishment on not only the kids, but to his wife…”
KLEIN: “Corporal punishment—like beatings?”
PHELPS: “Yeah, there was a lot of that…He was a very angry person. So, when he was administering it, it was extremely violent at times, lasting for hours…there would be some of the violence, then he would just go on these hour-long rants about how our behaviour was violating God’s law.”

On Fred Phelps taking drugs and forcing his kids to run marathons:
“He had gained a lot of weight because he was taking drugs—amphetamines, and then he needed barbiturates at night. He was going to law school and he really got himself in trouble healthwise, and ended up in the hospital and came out of that with this determination and rather than just going out and developing an exercise program for himself and getting himself fit, it turned into this obsession of running 5 or 10 miles every day, and then eventually it turned into, we’re running 15 and 20 miles, and we’re going out and running marathons. Which, okay, that’s not the end of the world—but we’re talking about 7- and 8-year-old kids running 25 miles at a time. It points to this extreme behaviour.”

Thanks to The Standard senior producer Jonathan Roth for the video. —MJ