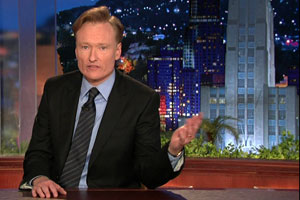 Conan O’Brien going to TBS—that is, basic cable? What’s next? AM radio? As news spread that O’Brien was not going to hook up with Fox, as expected, and had signed a five-year deal with TBS to host a daily show at 11:00 pm, observers wondered why he had opted for off-off Broadway. Washington Post media reporter Howard Kurtz tweeted, “TBS seems like a small stage for Conan, but maybe he’ll have a lot more freedom than at a broadcast net.” But The Los Angeles Times reported that O’Brien’s deal with TBS will give him ownership of the show—and “give him the potential to make a lot more money then if he were just a hired hand hosting a show owned by a network.”

Mo’ money is usually a good incentive. I wonder, though, if O’Brien also had another reason. I’m not intimately familiar with all his thinking on these matters. But I did once bump into him (literally) at ABC Carpet in New York City. So I think I may have some insight to share: O’Brien has seen the future, and it’s—brace yourself!—the Internets.

These days, a big launching pad—say, a network television show—is not as necessary as it once was for anyone looking to grab hold of the nation’s imagination, or funny bone. A joke, a funny bit, a video—all of this can now be seen by as many people on-line as on-couch. (SNL got its groove back once its jabs became easily shared via email links and were no longer confined to an audience of late-night hipsters, slackers, and Boomer insomniacs.) O’Brien only requires that some outfit give him a decent stage for the TV version of his laff-fest; then he’ll be able to reach plenty of Cocoheads via websites, Twitter, and whatever comes next. And while porn has long produced profits on the web, there’s a good chance that in-demand funny people will figure out how to do that before, say, newspapers do.

On the web, the name on the marquee is all that counts. If you have a brand—or are a brand—you can transcend the entity that hosts you. O’Brien doesn’t need the reach of one of the dinosaur networks. TBS will provide the booster rocket, but O’Brien has the juice, thanks to the opportunity provided by all those connected computers across the planet, to take his show (think of it as an enterprise) into orbit.

So TBS can thank DARPA for making this possible. (Yes, more evidence of your tax dollars at work.) Then again, maybe it was the money. You should have seen the stuff that O’Brien was eying at ABC Carpet.