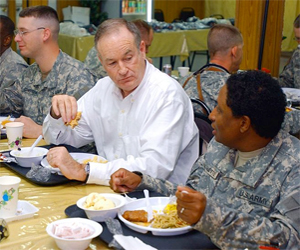 Bill O’Reilly is a mensch. A politically obtuse, verbally abusive, filthy rich one, but a mensch nonetheless.

The conservative pundit put a little more daylight between himself and the Glenn Beck-loving, conspiracy-theorizing right wing Thursday with a touching personal gesture: He offered to help the father of a Marine killed in Iraq after he lost a lawsuit to the neoluddite child-hating Westboro Baptist Church of Fred “God Hates Fags” Phelps.

It wasn’t supposed to be this way. After Albert Snyder lost his son, Lance Cpl. Matthew Snyder, in a vehicle accident in Anbar province, he was shocked to find Matt’s military funeral mobbed by Phelps’ crew of sign-carrying flat-earthers, whose shtick involves loudly thanking God for smiting gay-loving, libertine America and its sworn defenders. Snyder did what most grieving parents would have done: he sued the church. “They wanted their message heard, and they didn’t care who they stepped over,” Mr. Snyder testified. “My son should have been buried with dignity, not with a bunch of clowns outside.” The court awarded him $11 million dollars.

But a US Court of Appeals overturned that award, saying Phelps’ homophobic grandstanding was protected speech under the First Amendment. “As utterly distasteful as these signs are, they involve matters of public concern, including the issues of homosexuals in the military, the sex-abuse scandal within the Catholic Church, and the political and moral conduct of the United States and its citizens,” the majority opinion stated. Not only did Snyder lose his damages, but he was ordered to pay Westboro’s legal fees, to the tune of $16,510.

That’s where O’Reilly, who’s never been known for his warmth, stepped in. “That is an outrage,” he said on his show Tuesday, according to the conservative site Newsmax. “I will pay Mr. Snyder’s obligation. I am not going to let this injustice stand…It’s obvious they were disturbing the peace by disrupting the funeral. They should have been arrested, but our system is so screwed up, so screwed up, that loons are allowed to run wild. Snyder is fighting the good fight, and he is taking his case to the Supreme Court as he should. We are behind him 100 percent.”

Indeed, the high court has agreed to hear Snyder’s appeal of the appeal this fall. That means more legal fees in the meantime; Snyder’s lawyer is soliciting more donations at MatthewSnyder.org, and the American Legion is vowing to raise funds, too.

Phelps couldn’t be reached for comment, and his church’s website—GodHatesFags.com (sorry, no live link!)—appeared late Thursday to be too jammed up with traffic to access. With many messages of support, no doubt.