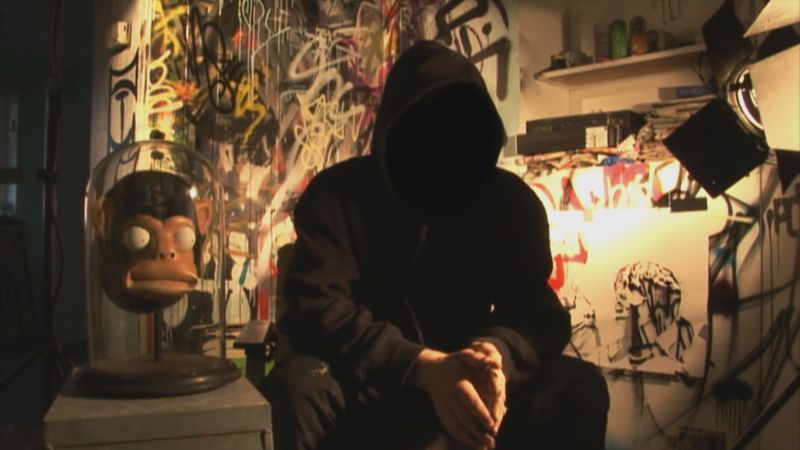 Banksy in the shadows

While the nuances of the stranger-than-fiction (and, as many have suggested, partially fictional) events leading up to the disaster in question are lost somewhat in a basic plot summary, let’s give it a whirl: Thierry Guetta, the French owner of a vintage clothing shop in Los Angeles, is obsessed with videotaping everything around him. Through a family connection and a growing fixation, he finds himself documenting the “biggest counter-cultural movement since punk,” following the likes of Space Invader and Shepard Fairey—who would later create the most ubiquitous Obama poster in the world.

All of this leads Guetta to the infamously furtive Banksy, whom he befriends and videotapes under strict, identity-concealing conditions. (Throughout the film, Banksy appears hooded, his face in shadow, his voice mechanically distorted.) He films Banksy in the studio—creating stencils, showing off boxes full of counterfeit pound notes with Princess Di’s face on them—and even follows him on a nearly ill-fated Disneyland stunt. (Banksy installs a Guantanamo Bay-related figure near one of the rides, effectively shutting down part of the park.)

After Disneyland, Banksy’s first US exhibition—dubbed “Barely Legal,” it featured an elephant Banksy had camouflaged with children’s face paint and allowed to wander the room; half of Hollywood showed up, along with a swarm of newscasters—inadvertently forces street art into the spotlight. The art establishment takes interest, street art starts being sold by famous auction houses, and suddenly no contemporary collection is complete without a Banksy. Banksy, in turn, decides that the time is right for Guetta to unleash his documentary about street art to dispel the idea that the movement was ever about making money.

A nice idea, but that’s when things really take a turn for the bizarre. Guetta takes thousands of hours of footage and cobbles together an unwatchable, 90-minute nightmare reel called Life Remote Control. It’s at this point that Banksy admits that perhaps Guetta was never exactly a filmmaker, but “was maybe someone with mental problems and a video camera.”

But it isn’t Guetta’s film, in the end, that we’re watching—it’s Banksy’s. Banksy turns the camera on Guetta, suggesting he return to Los Angeles and throw himself into the art scene, which he does with startling vigor. Guetta rechristens himself “Mister Brainwash,” refinances his house to mount a commercial-scale art-making operation, and puts together a hyped-up show of inane, derivative street art-themed pop art that becomes an LA Weekly cover story and nets the newly minted “artist” a million dollars. (Guetta’s work also graces the cover of Celebration, Madonna’s greatest-hits album.)

Though the seams appear to show at this point, and it becomes tempting to interpret Guetta’s meteoric, idiotic rise to success as a deftly engineered hoax, the point is that it could just as easily be real. The fact that we can’t know for sure is what makes this film so wonderfully mystifying. Whether orchestrated or perfectly accidental, the fact remains that Mister Brainwash—whatever he is—became an international art star by catching the wave of a commercialized counter-cultural movement and pumping out product. That alone makes Exit Through the Gift Shop a wonder—both documentary evidence of the street art movement and an immensely entertaining, jaw-dropping fable about art, hype, and selling out that’s infused with prankish vitality.