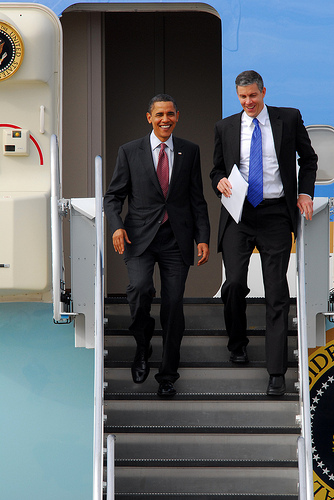 In the ambitious blueprint for overhauling federal education policy that President Obama presented to Congress on Monday, he outlined a vision of higher academic standards and fewer federal proscriptions for how to meet them — a vision that applies to most of the country’s 98,000 public schools. For the lowest performing 5 percent of schools, however, Obama proposes stiff consequences for academic failure, including firing most of the principals and teachers who run them. The idea has drawn ire from the nation’s two largest and most powerful teachers unions and threatens to derail education reform.

Obama and Secretary of Education Arne Duncan are firm believers in the notion that the most important factor in students’ success “is not the color of their skin or the income of their parents; it’s the person standing at the front of the classroom.” Without a cadre of excellent teachers, Obama believes it will be impossible to turn around the nation’s lowest performing schools. In short, getting all students “college-ready and career-ready” by 2020 means weeding out the worst teachers at schools where students simply aren’t learning.

But Dennis Van Roekel, president of the 3-million-member National Education Association, doesn’t consider axing teachers a reasonable solution to students’ under achievement. “If there’s a high-crime neighborhood, you don’t fire the police officers,” he told New York Times education reporter Sam Dillion. “This is a huge issue for us.” American Federation of Teachers President Randi Weingarten criticized the plan for placing too much responsibility on teachers without giving them sufficient authority to drive reform efforts. It’s unclear how AFT wants to revise Obama’s plan. Weingarten couldn’t be reached for comment.

If unions turn key Democrats against Obama’s plan, he may be able make up the lost votes with support from Republicans, notes Alyson Klein of Education Week. Michael Petrilli, a vice president at the Thomas B. Fordham Institute who served in George W. Bush’s Education Department, considers the blueprint “a huge improvement over current law” and says that it “backs away from federal intrusion big time….Republicans couldn’t expect anything more friendly to the states.”

Just about eveyone agrees that No Child Left Behind is long overdue for an update. And yet bipartisanship is no guarantee of success. House Education and Labor Committee Chairman George Miller proposed a re-write three years ago. His effort failed in part due to the same snag that Obama is facing: A call to “close the teacher quality gap.”