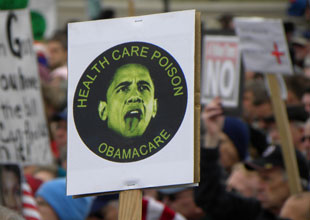 On Tuesday afternoon, anti-health care reform Tea Party activists were buzzing inside a cramped 10-by-10 foot meeting room in the Capitol Hill Suites Hotel, a few blocks from the Capitol dome. This “war room” had previously been set up by conservative new media activist Michael Patrick Leahy, author of Rules for Radical Conservatives, a book based on the grassroots organizing tactics of Saul Alinsky. Volunteers have been staffing the room since March 9 and said they plan to be there until March 31 to help coordinate a grassroots lobbying campaign on Capitol Hill to kill the health care bill.

The room was crowded this day, thanks to the “People’s Surge”—a protest organized by FreedomWorks and various Tea Party leaders. Several thousand people were storming the Hill to attend anti-health care reform events, including a “code red” rally featuring Rep. Michele Bachmann (R-Minn.). And lots of them made the pilgrimage to the war room, seeking cookies, wi-fi, and congressional lobbying assignments. Inside, a volunteer stood next to a flip chart listing House members in order of lobbying priority and notations about constituents who’d paid them visits. But the Tea Partiers who stopped by for marching orders highlighted one of the movement’s biggest challenges in fighting the health care bill: they didn’t have anyone to lobby.

One elderly Michigan couple, after checking out the flip chart, looked troubled and eventually asked the volunteer in charge if they could be teamed up with someone who lived in the district of a representative who was “on the fence.” They noted that their own congressman was already voting against the bill, so they were at a loss for how to proceed. It was a common dilemma for the Tea Partiers who swarmed the Hill. Even Robin Stublen, the Punta Gorda, Florida, organizer who came up with the idea of this “people’s surge” wasn’t racing in to see anyone in the Capitol. His own congressman, Tom Rooney, was already a solid “no” vote. It turns out that most of the Tea Partiers participating in this protest seem to hail—no surprise—from conservative districts represented by Republican legislators opposed to the health care bill.

Dressed in a tweed jacket, red tie and red baseball cap, a grey-bearded Tom Whitmore, from the Washington DC Tea Party, was staffing the war room. He conceded that the effort was attracting a lot of people whose representatives already planned to vote “no” on the health care bill. “We’ve had lots of people wanting to see Stupak,” he offered, referring to Rep. Bart Stupak, the major anti-abortion Democratic hold-out on the legislation. Indeed, the Michigan couple had already been to see him, just to “make sure he was still going to vote against the bill.”

Unlike in December, when Tea Partiers flooded the Senate office buildings trying to persuade their senators to vote against health care reform, Tuesday’s lobbying events were focused solely on the House—a far more parochial institution. And all of the potential for vote-changing lay with a small number of Democrats. After all, House Republicans are firmly committed to a no vote. And while Tea Party leaders like to insist that they are a nonpartisan bunch, most of the people who had flocked to DC for these events appeared to be die-hard Republicans from GOP districts. This made their lobby day rather anticlimactic.

Big corporations avoid this problem by hiring lobbyists from both political parties, but the Tea Partiers don’t really have that option. The war room organizers tried to get around their dilemma—more lobbyists than targets—by creating teams that included one constituent and a bunch of hangers-on who could at least get in the door of the office of somebody’s congressman.

Still, Whitmore was trying to coach activists on how to talk to members of Congress from outside their own districts. He recommended that the Tea Partiers ask legislators to refuse donations from outside their districts if they decline to meet with their visitors. And if that doesn’t work, he suggested another no-so-sophisticated strategy: give the member of Congress ten bucks, call it a donation, and then demand an audience. After all, he said, the health care bill, “takes over one-sixth of the economy,” making it a national issue that will affect all Americans, not just those in a single congressional district.

But Whitmore himself wasn’t in a great position to advise activists on bipartisan lobbying strategies that could help them reach undecided or wavering Democrats. Though he identified himself to reporters as a Tea Partier, Whitmore also happens to hold a leadership position in the Prince William County Republican Party in Virginia. As for the “Listen to Me!” buttons worn by volunteers and the signs littering the war room, those were paid for by—who else?—the Republican National Committee.