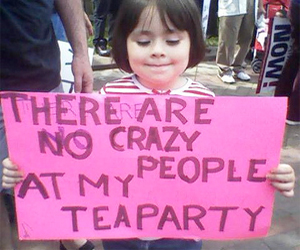 No, they’re not going away.

This morning, our estimable DC bureau chief, David Corn, explained how both political parties will persist in pretty much the same war posture they’d sustained before Sunday’s health care vote. But those politicos’ fortunes continue to be tied to the guerrilla theater of the patriot set: the Tea Party movement and allied groups like the Oath Keepers, who vow that they’ll destroy the union in order to save it. And there’s much destroying left to do. As the Washington Independent‘s David Weigel described the protesters’ zeitgeist on the National Mall late Sunday: “Just because the bill had passed didn’t mean they couldn’t kill it.”

The Tea Parties’ enduring contribution to the American pageant, though, may be to bring about a massive electoral reaction against their positions. As time passes, more Americans may realize that Sunday was not “the day that America turned its back on our unique system of democratic capitalism,” as ex-Sen. Rick Santorum put it. Rather than joining Santorum’s “freedom-loving patriots” in a “fight against this tyranny to reclaim our birthright,” more Americans may focus on the loudest, most unnerving elements in the patriot crowd: the politically illiterate, paranoid, and racist. The party will live on, to be sure—but unless its tack changes considerably, it may live on in mainstream politics as a punch line; in textbooks, as a cautionary tale; in gun shows, as a vehicle for bumper-sticker and shotgun sales.

The chief criterion for membership in some Tea Party groups, it seems, is the ability to ignore one’s own ignorance about American society. Just before last weekend’s showdown, Bruce Bartlett, a supply-sider who worked in the Reagan and G.H.W. Bush administrations, and David Frum—the manichaean George W. Bush speechwriter who branded the “axis of evil”—found hard statistical evidence of many Tea Partiers’ confusion about Americans’ actual tax rates, standards of living, and domestic energy sources. Among the discoveries:

Of course, other dubious beliefs circulate among hard-core “patriots,” such as the notions that the Constitution and the US are divinely inspired. Or the apparent misunderstanding among so many about how the US political process works, from the election of a president to the uses of the filibuster to the history of legislative reconciliation to the interpretation of the 10th Amendment. Then there’s the birther movement, which has kept questions about Obama’s Americanness alive longer than most mavens of the left kept the 2000 presidential recount alive.

Frum did find a justification of sorts for Tea Partiers’ anger: “One possible explanation may be that despite these positive figures, Tea Partiers have felt less progress in their personal circumstances. 75% surveyed said that their personal financial situation is worse off than two years ago. Many expressed a belief that their personal situation would continue to deteriorate. The economy, writ large, appears to be improving, but the Tea Partiers who were driven to protest in desperate economic times have still not felt the recovery.”

In other words, they are industrial producers and retailers, small-business owners, lower- and middle-class workers who were hit hardest by the recession—the economic plunge caused by unregulated financial speculation under the George W. Bush administration, the same administration that pioneered the trillion-dollar bailout and likely will have cost the nation $3 trillion in wealth due to its foreign wars. One must ask why Obama and not the crisis-causing, deficit-spending, government-expanding Bush arouses the ire of the Tea Partier.

The reason is because the movement and its diverse membership is largely shaped by its ugliest elements. The latest charge against Obama is that he’s a “socialist,” and it’s not just coming from the fringes. It’s being encouraged by the mainstream of the right wing—see Santorum’s quote above, as well as Bush-era health secretary Tommy Thompson’s comments Sunday about the changing of “the social services fabric” by this “beginning of a government-controlled health care system.” All this talk is suspect: In terms of legislation, the Texan Lyndon B. Johnson was more left-liberal in the 1960s than the 21st-century Obama. And even Thompson had wonderful things to say about Johnson’s socialism—Medicare and Medicaid. (Perhaps this explains the famed Tea Partiers’ misguided exhortation to “keep the government out of Medicare.”)

Nonetheless, the socialist label is telling. As are the recent assertions by right-wingers that “ObamaCare” is unconstitutional, and the states don’t have to abide by it. These new political epithets—”socialist” and “unconstitutional”—can also be seen as cultural code words, meant to convey to like-minded concerned Americans that Barack Obama is not one of us. Obama could suggest legislation commending the baby Jesus for being born as a light unto mankind, and many in the Tea Party crowd would dismiss it as a totalitarian plot. They do not care what he says, only what (they believe) he represents: The sunset of their ilk’s ascendancy in politics. Take every criticism of Obama you’ve heard that doesn’t rest on a point of policy or coherent political philosophy; add in the calls of “nigger” and “faggot” hurled at Democratic lawmakers on the Hill this weekend; then look at those “socialist” and “unconstitutional” criticisms again. They represent the last safe refuge of the bigot. And although Middle Americans sometimes share these criticisms, they do not represent Middle America exclusively; they represent a deeper, darker id of a past nation. They represent what I call Inner America.

(Testy right-wingers will say that this goes for the Bush-hating, vitriol-spouting left, too—and to an extent they’ll be correct. A large part of the antipathy to Bush rested in perceptions of the man himself as provincial, unread, aloof, privileged—all made the easier by his cowboy boots, Texas ranch, and southern drawl. And now, antipathy to Obama rests in preceptions of him as cosmpolitan, effete, intellectual, aloof, spoiled, presumptuous. That’s affinity politics for you—only there’s a vast difference between not identifying with Obama’s politics and constructing him as alien, anti-American, unconstitutional, uncapitalist. No one ever called George W. Bush a foreigner.)

The Tea Party will continue to agitate. Already, it is spinning the health care reform movement as a vast media conspiracy. “The media’s going to promote it as a victory for Democrats,” an organizer told Weigel on Sunday. “But I think enough people are out there—maybe they weren’t following it as closely today—who are going to pay attention now. We’re looking at what’s going to happen in the states, we’re possibly looking at legal challenges.”

That seems to be the extent of the Tea Party’s current vision for America: an incremental chipping away at national progress, with no clear alternative vision for the future. Some on the left have drawn parallels between fascism and the new American patriot movement, but that’s unfair. Fascists, it’s true, like to wrap their racism, paranoia, and economic populism in a militant nationalist shell. But fascists are also meticulate planners. Some Tea Partiers meet the former criterion; few meet the latter. And until the movement’s less-ugly elements get organized, the Tea Party will have no plan beyond unfocused anger. The mob is their message. And the mobbier they get, they less politically relevant they’ll become.