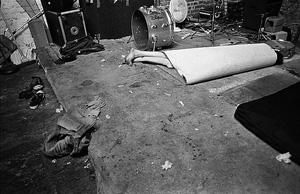 A few years back Mark Murrmann joined Mother Jones, bringing with him an accomplished and varied resume as a documentary photographer, and a badass. Since then he’s brought some incredible photographers to our pages and has helped us produce several award-nominated images. Still, even while his desk job is as a photo editor, Mark still manages to work his own Leica on the regular. Whether it be on assignment for Jim Beam, raw takes from the punk rock touring scene, or pics from the Orange Revolution, Mark never misses an opportunity to capture life in the raw. Maddie Oatman of The Rumpus recently caught up with Mark and asked him about his striking perspective. Some outtakes (catch the full interview here):

“For Murrmann, no scene is too mundane to make memorable. His unobtrusive style and casual demeanor allow him to easily camouflage with his surroundings, and he’s an expert at hiding his camera and letting the action take charge.”

Mark’s intense photographic energy translates well in both the political and punk worlds, as both document the restlessness, the voyeurism, and the debauchery that encompass political and musical acts. On where photos meet punk:

“[F]or punk music, in particular, the role of photography has a long history. It’s something that has gone hand-in-hand. Photographing other types of bands and bigger stages is just so weird because of security, and you’re only allowed to photograph the first three songs. But with punk bands, you’re right up against the stage, and often they’ll play on the floor. It’s all so much of the same experience rather than being separated.”

Mark’s photographed everything from the Orange Revolution in the Ukraine and Hurricane Katrina to average passersby on San Francisco streets, but one of his most “aha” moments occurred while snapping tourists in prisons.

“I photographed Alcatraz a lot because it’s right here, but I also went around the country photographing other prison sites looking at how the prisons are reconfigured to handle tourists and how the tourists interacted with the prison. It’s just really weird: a place that so many people spend their whole lives in not wanting to be, and now streams of people are going through.”

Again, you can head to The Rumpus to read their full interview with Mark, complete with several of his amazing photographs. Rock on, Murrmann.