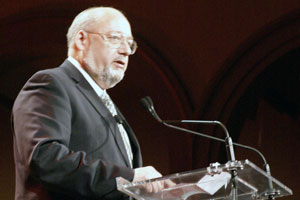 If the weekend before the passage of health care reform resembled a nail-biting thriller, its high-speed car chase was the last-minute scramble among Democrats to reach a deal on abortion. It wasn’t until six hours before the vote that Rep. Bart Stupak (D-Mich.) announced that an agreement had been reached with the White House, ensuring that his block of anti-abortion Democrats would be the decisive votes for the health care bill. Yet even on that tense final day, he found time to speak with a man named Richard Doerflinger. That was no coincidence.

Doerflinger has a lengthy title—he’s the associate director of the United States Conference of Catholic Bishops’ Secretariat of Pro-Life Activities. But he’s better understood simply as the point man on abortion issues for the most powerful institution in the US Catholic Church. Most people have never heard of him. However, Doerflinger helped write the Stupak amendment in the House bill that placed tight restrictions on insurance coverage of abortion. He amplified spurious charges that the Senate bill would use government money to fund abortions. Doerflinger fought to the bitter end for the Stupak amendment to be included in the final legislation—even after Stupak himself had abandoned the fight. By refusing to compromise on what was, in the end, a minor difference between the House and Senate bills, Doerflinger—the man behind the curtain of the abortion imbroglio—very nearly killed health care reform.

Doerflinger has worked for the US Conference of Catholic Bishops for over a quarter-century. Bearded and balding, with large glasses, he doesn’t fit the stereotype of a powerful Washington lobbyist. But he’s extremely influential. A 2009 award citation noted that he has been “involved in almost every major pro-life initiative in Congress since 1980.” In the health care fight, the bishops were “primarily relying on Mr. Doerflinger,” says health law expert Tim Jost. Other sources, on and off the Hill, confirm Doerflinger’s importance. In turn, his bosses exert great sway over Democrats who oppose abortion rights.

Like many other Catholic groups, the bishops have long advocated for universal health care. But as abortion moved to the forefront of the health care debate, a schism occurred. As the health care bill neared a vote in the House last November, Stupak claimed that by providing tax credits to help people buy insurance, the legislation would result in government money being used to pay for abortions. With Doerflinger’s help, he drafted an amendment that required women to purchase a separate “rider” policy with their own money if they wanted abortion coverage. When the action shifted to the Senate, Sen. Ben Nelson (D-Neb.) inserted slightly different anti-abortion language requiring women who receive tax credits to cut a separate check to pay for the part of their insurance policy that would cover abortion. Many Catholic groups who favored health care reform decided that the Senate anti-abortion provisions were acceptable. By late March, Catholic nuns, the Catholic Health Association, and many individual pro-life faith leaders had admitted publicly that the Senate bill would not fund abortion, and expressed support for the Democrats’ plan.

But the bishops wouldn’t budge. Doerflinger insisted that the Senate bill would still lead to federal financing of abortion, and that only the House version would do. Soon, the ostensibly pro-reform bishops had joined forces with a coalition of conservative groups who had no desire to see a health care bill pass. These included Focus on the Family and the National Right to Life Committee (NRLC), which attacked the Democrats’ plan as “death care” and warned that it would lead to the “rationing” of medical treatment.

Before long, liberal Catholics were questioning the motives of Doerflinger and the bishops in aligning themselves with these right-wing groups. In mid-March, the National Catholic Reporter slammed the bishops for embracing a “red herring” argument served up by the NRLC that the Senate bill would allow community health centers to fund abortions. In fact, community health care centers have never performed abortions and there was no plan for them to do so in future. “The bishops have to be clear that some of their talking points might lead honest observers to question their competence—or worse,” the National Catholic Reporter concluded. (Doerflinger declined to respond to follow-up questions regarding the community health centers issue.)

The liberal Catholic magazine Commonweal (which my father edits) accused the bishops of “crying wolf.” After the bill passed, the New York Times‘ Ross Douthat, a prominent conservative Catholic, acknowledged that “anti-abortion conservatives… backed [Stupak] to the hilt not because they wanted him to succeed, but because they assumed that he would fail, and in failing, drag the whole health care package down to defeat.”

Perhaps the biggest question hanging over the bishops’ strategy is why they were prepared to see health care reform fail unless the Stupak amendment’s abortion provisions were adopted. After all, there was virtually no difference between the Stupak amendment in the House bill—which Doerflinger insisted was the only acceptable option—and the Nelson language in the Senate bill, which the bishops warned would “require people to pay for other people’s abortions.”

The Stupak amendment required women to take out a separate policy to cover abortion. The Nelson amendment required them to cut a separate check for abortion coverage. Most independent observers, including PolitiFact.com, say that neither arrangement would lead to federal funding of abortion. Conversely, if one amendment would amount to “requiring people to pay for other people’s abortions,” the other would, too. In both cases, some people who are receiving money from the government for health insurance will be purchasing abortion coverage.

Stupak pushed Doerflinger’s position almost until the very end. On March 17, he told Fox News that he didn’t listen to nuns when drafting pro-life language, and instead relied on “leading bishops, Focus on the Family, and The National Right to Life Committee.” But four days later, on the day of the final vote, he abruptly changed course. Over the bishops’ objections, he accepted the White House’s compromise: an executive order reiterating that no government money would be used to pay for abortions.

In the days since Stupak voted for the bill, relations between his bloc and the bishops have soured. “The church does have some work to do in dealing with frayed nerves and divisions on policy questions,” Doerflinger told Catholic News Service.  Last week, Stupak attacked the bishops and other anti-abortion groups for “great hypocrisy” in opposing Obama’s executive order after having supported former President George W. Bush’s executive order banning stem cell research in 2007. He told the Daily Caller he believed the bishops and the groups they were allied with were “just using the life issue to try to bring down health-care reform.” In other words, he suspected he was wrong to trust that his former allies were acting in good faith.