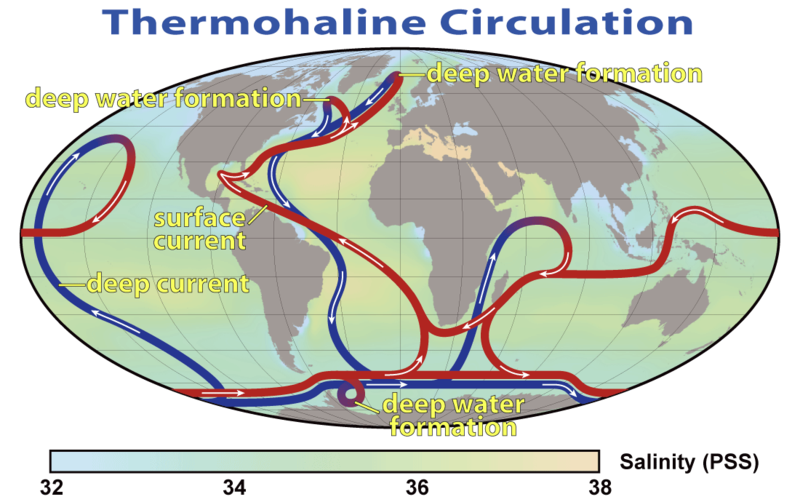 The latest analysis of data from 2002 and 2009 shows no slowing of the North Atlantic portion of the “ocean conveyer” that keeps Europe warm.

His paper in the current Geophysical Research Letters finds no significant slowing in the critical climate switch known as the Atlantic Meridional Overturning Circulation. From the abstract:

Global warming has been predicted to slow the Atlantic Meridional Overturning Circulation (AMOC), resulting in significant regional climate impacts across the North Atlantic and beyond. Here, satellite observations of sea surface height (SSH) along with temperature, salinity and velocity from profiling floats are used to estimate changes in the northward-flowing, upper limb of the AMOC at latitudes around 41°N. The 2004 through 2006 mean overturning is found to be 15.5 ± 2.4 Sv (106 m3/s) with somewhat smaller seasonal and interannual variability than at lower latitudes. There is no significant trend in overturning strength between 2002 and 2009. Altimeter data, however, suggest an increase of 2.6 Sv since 1993, consistent with North Atlantic warming during this same period. Despite significant seasonal to interannual fluctuations, these observations demonstrate that substantial slowing of the AMOC did not occur during the past 7 years and is unlikely to have occurred in the past 2 decades.

Science Now reports that a finding of no slowing is fine by physical oceanographer Carl Wunsch of the Massachusetts Institute of Technology:

The satellite-drifter analysis is only the latest evidence against a slowing, Wunsch says. And at this rate, it will likely be decades before the conveyor changes enough to be detected by in situ or satellite-borne instruments.

The video is one of NASA’s better pieces, with Josh Willis decribing how the satellite observations of sea surface height work.