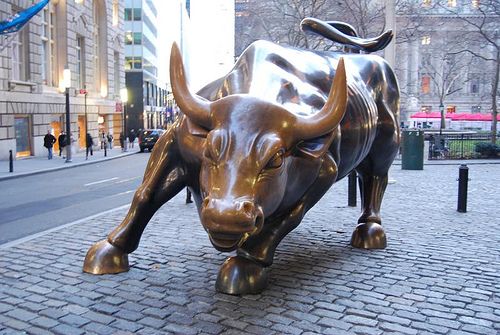 Earlier this month, a comparable bomb dropped on Wall Street, courtesy of voluminous and exhaustive report on the downfall of Lehman Brothers. The report, thousands of pages long and numbering nine volumes, was prepared by Lehman’s bankruptcy examiner. He found scores of damning evidence on the firm’s legal but utterly dangerous accounting maneuvers, how it shifted losses and risk off its books to look healthier and stronger, how it deceived regulators, and how Lehman’s leader, Dick Fuld, was “at least grossly negligent” in the handling of it all. The Financial Times reported this week that JPMorgan Chase, that mainstay of Wall Street, has used the “Repo 105” accounting gimmick, too. These findings are, in short, all the ammunition Obama, Sen. Chris Dodd (D-Conn.), and those clamoring for financial reform need to press for a major overhaul of how Wall Street does business. They couldn’t have wished for a better opportunity.

Instead, there’s been silence. Nothing from Obama, from top economic adviser Larry Summers, from Treasury Secretary Tim Geithner (more on him in a minute), from anyone, really. The SEC more or less acknowledged the report’s existence, saying it would be “helpful.” But that’s about it. Here’s Obama’s big opening to highlight the worst of Wall Street’s excesses and obfuscation, 2,200 pages of cold, crisp facts to back him up…and he lets the opportunity slip past. Why?

Does it prove he’s too close to Wall Street? That he won’t take off the kid gloves when it comes to confidantes like Jamie Dimon, CEO of JPMorgan Chase? It’s worth nothing that the Lehman report does implicate one of Obama’s top financial figures, Tim Geithner. Geithner, the report says, was told directly about the “Repo 105” accounting gimmick, and how Lehman used it to move toxic assets of its book to look healthier (yet never reported Repo 105 on its regulatory filings); Geithner, when interviewed by the examiner, said he didn’t remember being told about Repo 105. Yves Smith at Naked Capitalism put it best: “the NY Fed, and thus Timothy Geithner, were at a minimum massively derelict in the performance of their duties, and may well be culpable in aiding and abetting Lehman in accounting fraud and [Sarbanes-Oxley] violations.” Maybe Obama doesn’t want to burn one of his own so he’s mostly ignoring the Lehman report.

Still, that’s no excuse. Obama could easily draw on the Lehman report without dragging Geithner into the fray. So why the silence, Mr. President? The only explanations that came to mind are: (1) Obama’s too wrapped up in health care vote-wrangling to bother with the Lehman report and the financial reform debate, or (2) he doesn’t want to battle Wall Street. It’s probably both. Nevertheless, it’s sad to see top GOPers foretelling their stall tactics on financial reform and blasting “punk staffers” on financial reform while Obama—and many top Dems, for that matter—let the perfect opportunity to fight back pass them by.