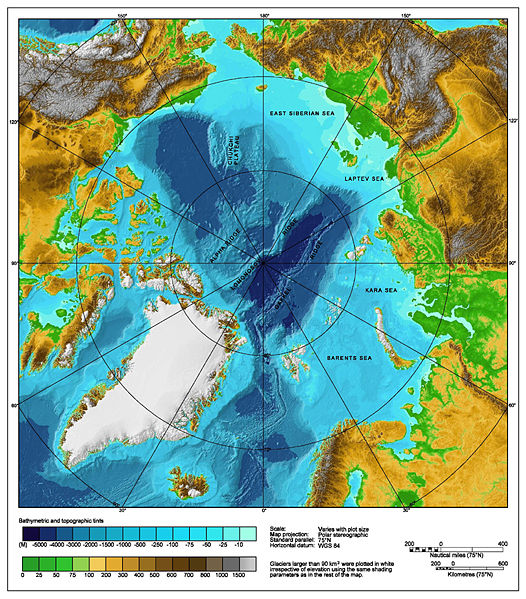 Arctic seabed stores of methane are now destabilizing and venting vast stores of frozen methane—a greenhouse gas 30 times more potent than carbon dioxide. The paper, in the prestigious journal Science, reports the permafrost under the East Siberian Arctic Shelf—long thought to be an impermeable barrier sealing in methane—is instead perforated and leaking large amounts of methane into the atmosphere. Melting of even a fraction of the clathrates stored in that shelf could trigger abrupt climate warming. Lead author Natalia Shakhova Shakhova of the International Arctic Research Center tells U of Alaska Fairbanks:

The East Siberian Arctic Shelf is a methane-rich area encompassing more than three-quarter million square miles of seafloor in the Arctic Ocean—three times larger than the nearby Siberian wetlands formerly considered the primary Northern Hemisphere source of atmospheric methane.

Shakhova’s research shows the East Siberian Arctic Shelf is already emitting 7 teragrams (1 teragram = 1.1 million tons) of methane yearly, about as much as the all the oceans of the world.

“Our concern is that the subsea permafrost has been showing signs of destabilization already,” says Shakhova. “If it further destabilizes, the methane emissions may not be teragrams, it would be significantly larger.”

From 2003 through 2008 the researchers took annual research cruises on the shelf, sampling seawater at various depths, and sampling the air above the ocean. Their findings:

In the shallow waters of the East Siberian Arctic Shelf, methane doesn’t have enough time to oxidize, and more of it rises to the surface and escapes into the atmosphere. That fact, combined with the sheer amount of methane in the region, adds an extreme volatility to this uncalculated variable in the climate models.

“The release to the atmosphere of only one percent of the methane assumed to be stored in shallow hydrate deposits might alter the current atmospheric burden of methane up to 3 to 4 times,” says Shakhova.